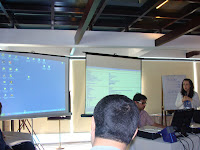 Last night the last presentations of the panels were made. There was also the final voting for the five winners per category. It was a long ceremony, followed by writing up the laudations of the five winners per category for the catalogue. For the last day only one more task was left, at least for the people that were still there; in the meantime some people had left already to catch their plane home. The departure is never a clean goodbye, just like the start is always in phases.

The last task consisted of three parts: the constituting of the Arab e-Content Awards, the jury distinctions and the final leg of the World Summit Youth Awards. The last one is a separate contest, putting the UN Millennium Development Goals into action. Out of 620 submissions, 280 projects were tested ready for evaluation. Having had the kick off for this years jury process, the exciting but challenging task of finding the most inspiring projects combining Internet Content with the UN MDGs, was to be completed in New Dehli. The WSYA winners will also be celebrated in Monterrey, Mexico, thanks to a grant of the Knight Foundation.

In the afternoon there was still a tour around the city. So far we had seen only the Hilton Hotel and the Qutb Minar. But this afternoon a small group was bussed to the three main touristic points of the Dehli: government city and the red fortress. 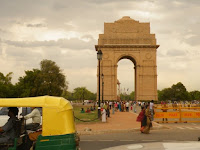 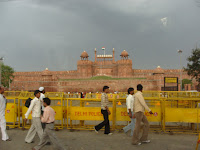 But there was still a surprise: Humayun’s Tomb. This tourist attraction was important as most of the jurors did not have a chance to go to the Tash Mahal (some lucky ones did and our Mexicon hostess Angeles even saw the world miracle at sunrise; how lucky she was and jealous I am). But Humayun’s Tomb is the next best. We arrived at the complex just in time to see the sunset on the beautifull marble dome; a few minutes later the dome was dull as can be seen on the video). 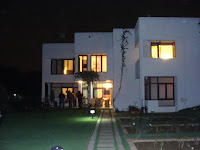 We were back in time to join the caravan for a party at an estate in the middle of Dehli. In the middle of this city there was an oasis of rest en green lawns; but we did not see too much of that as we arrived late. It is owned by a family of which the son is now one of the publishers of English newspapers. I had a chance to talk with him about newspapers. Was he feeling the churn of the subscriptions? No he said, not at all; in fact he was still experiencing growth. This is not surprising if you realise that India with a population of 1,2 billion people has a lot of illiteracy; but this illiteracy is slowly being combatted. So if one percent of the inhabitants are new readers, the publisher has real growth. This while in the western world, newspaper publishers only see a downturn of subscriptions and street sale. We had only a chance to be at the party for a little bit more than an hour as we had to depart for the airport. 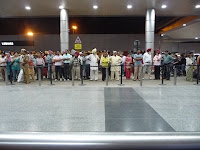 The night of the nineth of april I was flying back to Amsterdam through Vienna. We had been warned of long queus at the airport, but that appeared not to be a problem. I was ready for 6,5 hour flight to Vienna with Austrian Airlines. I had promised myself to read the book Do Good Design by David B. Berman, one of the inspiring new jurors, but I fell asleep (and it was not because of the content of the book).