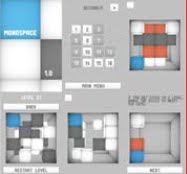 Created for the iPhone or iPod Touch, Monospace is a puzzle game requiring players to think in 2 and 3D dimensions. Its goal lies in maneuvering a blue box within a cube, in order to eliminate surrounding white boxes. But it’s not as simple as all that: not only are there rules governing how and when the boxes can be shifted, Monospace complicates the matter even further by switching the perspective. Each level begins with a 3D view; double-tap the screen though, and the stage collapses into a 2D image. It’s in this flat view that white cubes can be victimized by the little blue box. By changing the perspective, Monospace transforms simple puzzles into complex, mind-bending special riddles. The mechanics of play remain simple,
yet finding solutions to the more advanced arrangements can be mentally taxing.

My comment: Keeps you busy for a while. Play first the light version, to be downloaded from the app store.

“Swords & Soldiers” is a 2D side-scrolling real-time strategy game for the Nintendo Wii and a wonderful and fresh mix of Real Time Strategy gameplay, with the graphical presentation of a traditional side-scrolling arcade game. In each level, two armies fight for victory by building up their numbers, upgrading their castles, gathering gold and casting spells. The game can be played either in single-player or split-screen multiplayer mode, and features three different factions: the strong Vikings, the devious Aztecs and the cunning Chinese. Each faction possesses a diversity of qualities, skills and tactics. A series of challenging mini-games can be unlocked as players progress through their chosen campaign. Comical graphical style and strategic depth are inherent to this game, which can be downloaded from the Wii shop.

Comment: To me the looked rather classic and Mario-like with side scrolling and various levels. Appearantly the jury members could not be dragged away.

High speeds, sharp corners, water and weapons! Challenge up to 8 players to a race in this fun underwater PC internet game, customizing your vehicle to suit your playing style. Zoom with great precision through targets, twisting and turning, and collect weapons from special rings, which will also give you an energy boost or refill. In order to win, you must master the hazards and either shoot down all other players, or race to be first past the post. Level design, sound, graphics, controls and gameplay all work consistently together to make “Underwater Mayhem” a professional, exciting and balanced project.