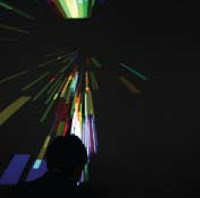 The Clavilux 2000 is an audiovisual instrument enabling reactive visualization of piano music in realtime. Via a connected computer vvvv patch, music played on the full 88-key digital piano with midi output is translated into a 2 or 3D permanent visual representation on a vertical projection above the keyboard. The concept is quite simple: for every note played on the keyboard, a new visual element appears in the form of a vertical bar; its dimensions, position and colour depending on the way in which the key is struck. This visual documentation of note length, velocity and harmonic relations can be referred to long after the music itself has faded away, giving an insight into the structure and composition of the music. Which notes were played most often? How harmonic was the piece? Clavilux 2000 has all the answers.

Express music visually with Vuvox – a performance tool designed to be used with a MIDI keyboard, sustain pedal and a webcam. Vuvox comprises both an audio input mode, which picks up sounds from the surrounding environment, and midem input from a keyboard. The higher the quality of music input, the more consistent, flowing and visually sophisticated the images appearing on the webcam screen become. The use of the Vuvox component therefore not only visually enhances and enriches the music performance for both performers and the audience; it can also serve as a feedback tool for amateurs learning to play an instrument.

My comment: another approach of making music visual, made by a musician.