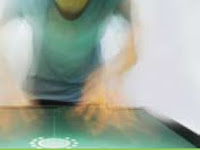 ‘akustisch’ is a new approach to producing, controlling and manipulating digital sound. Designed to allow digital performers maximum gestural expression, akustisch’s multitouch surface eliminates the need for traditional electronic music ‘controllers’ such as knobs and faders. Complex hand gestures can be made on the multitouch surface, the movement being interpreted as gestural input by an algorithm on the screen. As soon as a recognizable gesture is executed, a specific sound output is generated. As all ten fingers can be used for sound manipulation, the graphical user interface is split vertically into right and left-hand areas to allow for parallel initialization of two gestures at the same time; one for each hand. ‘akustisch’ enables complex compositions which result in captivating performances.

My comment: Complex and specific application for manipulating digital sound, but interesting for using in new compositions.

The amount of digital appliances and media found in domestic environments has risen drastically over the last decade. Digital TVs, DVD and Blu-ray players, digital picture frames, cleaning robots and other such devices have become part of our daily lives. Controlling these devices often requires a large number of remote controls that often lack intuitive interfaces. CRISTAL has been designed to simplify the control of our digital devices in and around the living room. An interactive tabletop system poses as a coffee table, and provides an intuitive interface by displaying real-time video footage from a ceiling mounted camera. The user can control the room’s devices by using multi-touch gestures directly on their digital projection. Lights can be controlled by making sliding gestures or movies can be watched by simply dragging them onto the TV screen. This way the interface allows a more natural and intuitive interaction experience.

My comment: A central table top to control home electronics appliances. Of course a link will be needed from the iPhone to the table top to start up processes before arriving home.

Oz, the intelligent and user-friendly alarm clock, has been designed to ease that often unpleasant transition between sleep and awakening. Easy to use and interactive, Oz will supply precise guidelines as to when it’s time to go to bed and when it’s time to get up, by calculating the amount of sleep your body needs according to your daily routine. The device consists of two parts: a portable 7-inch touch screen, and a base on which the battery is charged. A built-in miniaturized computer enables the device to be connected to the internet. Wake up to music from personal playlists or to a sunrise simulating light fader, or keep track of your dreams by tapping them into the touch screen. For insomniacs, Oz will suggest relaxation applications, such as soothing games, permitting a gradual descent into sleep. These - and many more - unique features will ensure that you always get up on the right side of the bed.

My comment: Another application of digital life from morning to night. Can't wait to buy it. Again a brilliant application from the Ecole de Gobelins.