Today it is 88 years ago that Mata Hara died in front of an execution squad in France. Mata Hari was born as Magaretha Geertruida Zelle in Leeuwarden on August 7, 1876. On October 15, 1917 during the First World War she was executed by a French firing squad on the count of treason and spying for the Germans. Since her execution she has been adopted by the city of Leeuwarden as one of the famous daughters of the city. On May 19, 2005 I wrote the blog The hunk of Leeuwarden, about a visit to the department of Communication & Multimedia Design (CMD) of the NHL. At that time the students were working on a secret assignment about the well known spy Mata Hari. 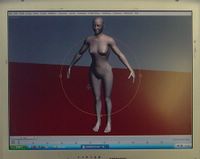 She was a dancer and stripper, who performed in Paris, Vienna, Monaco, Madrid and Milano and in between offered entertainment in bed for high-ranked military officers and members of the corps diplomatique. She was sentenced to death for treason on behalf of the Germans during the First World War.

The story of Mata Hari (Malesian for: eye of the day or sun) has fascinated moviemakers. Her story was filmed starring Magda Sonja, Greta Garbo, Zsa Zsa Gabor, Jeanne Moreau and Silvia Kristel. The story of her life was also recorded as a television series of 4 instalments in the Netherlands. There has been even a musical on Broadway. 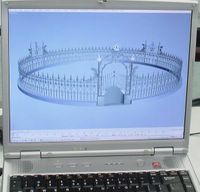 This is the 3D rendering of the fence of the public rose garden in Leeuwarden, which played a part in the life of Mata Hari

Mata Hari serves now as the figure head of a 3D multimedia project of the department CMD, which serves as an invitation for Frisian cultural heritage of the city of Leeuwarden and the province of Friesland. The project shows in seven minutes the Frisian history from mythological figures to the present and future of Friesland and Leeuwarden. The Mata Hari project will be shown on movie and animation festivals.
Gepost door Jak Boumans op 1:00 PM