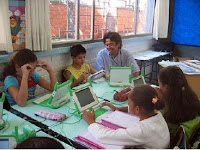 The OLPC laptops have been developed for children in an educational environment at an affordable price; the target price was 100$, but the eventual price became 187$. The intention was to offer the OLPC through government agencies. The laptop is small and can be spotted from a distance by the green frog colour. It has a display which can also be read in sunlight, so that it can be used as an e-reader for digital books. It has also a wi-fi connection. Since the launch of the OLPC a lot of educational software has been developed for it or customised.

The laptop has a lot of advantages. The hardware and software are based on open standards with no dependency on providers of closed software. In school no complex computer labs are needed, while communication for e-mail and internet work on wi-fi. The batteries last 5 to 12 hours with a capacity of 3 to 6 W. New display technology offers reading in daylight, while a stand-alone screen can also be used as e-reader for school books. The present project price of the laptop is around 150 euro, depending on the numbers acquired. The computer is almost 100 percent poison free and recyclable. The laptop can remotely be incapacitated when stolen. The laptop is tuned to the local language and culture for the software, keyboard, text-to-speech and books, as it can deal with languages and dialects.

The OLPC project was started by Nicholas Negroponte, the director of MIT Media Lab and was set up to produce an affordable school laptop for children in developing countries. Mock-ups were shown at the UN World Summit on the Information Society in 2003 and 2005. By 2007 the laptop was on the market and available to governments in developing countries. In 2008 the prototype for the second generation laptop was shown.

In the meantime the laptop is generating interest in the rest of the world and people want to acquire one. For this the Give 1 Get 1 program has been started. The laptop is now available at Amazon.com for Americans for 398 euro. The Maastricht project will offer laptops to school in Nicaragua. Talks about more projects in The Netherlands are being held in Amsterdam, Nijmegen and Almere.