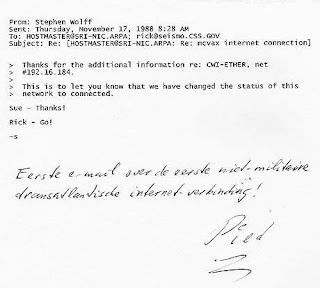 On 17 November it is exactly twenty years ago that The Netherlands as first European country was connected to internet. On that day in 1988 at 2:30 pm Mr Piet Beertema, system controller of CWI in Amsterdam, rceived the historic e-mail message (see illustration), saying that CWI as the first institute outside the USA got access to the NSFnet, the academic computer network, which would become the worldwide internet. In a movie on You Tube, Mr Beertema recalls the event (sadly enough in Dutch).
The Netherlands had received already the domain name .nl on 25 April in 1986, but at that time it was difficult to get access to the mainly military network ARPAnet. Two years later the status of the the CWI was changed from waiting to operational connected to the American internet network, thanks to the pioneer Rick Adams. The access to the NSFnet by CWI was the start of access for many an academic and research institute in The Netherlands. The Dutch academic network SURFnet was instrumental in this. Commercial companies followed later and private people had to wait till 1993. CWI grew into the internet exchange between Europe and the USA, which later became the Amsterdam Internet Exchange.

This all happened against the backdrop of a battle between the protocols OSI networking of the official telecom standards bodies and the academic protocols like TCP/IP. The OSI standards such as X25 and X400 were supported by European Commission and the battle for TCP/IP lasted in The Netherlands beyond 1990. The Dutch PTT, shareholder in the academic network SURFnet, stuck to OSI as long as it could, but in the end the academics won and eventually the Dutch PTT bowed out as SURFnet shareholder.