BPN 1409 The Future of Futurism 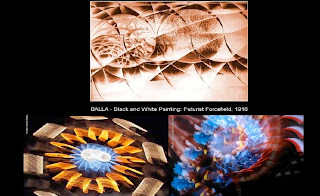 This morning I placed the announcement on the Future of Futurism, a paper presented at the “Generative Art 2009” Conference held at the Polytechnical School of Milano from 15 to 17 December, 2009. This afternoon I received the abstract of the paper, written by Rick Doble, an American photographer, Marcella Giulia Lorenzi,  an Italo-Canadian Artist-Researcher and an Italian Scientist Mauro Francaviglia. Here is the abstract:
On the 100th anniversary of the Futurist art movement which started in Milano, we want to examine the aims and ideas of Futurist imagery, then proceed to a discussion of how today's digital photography can achieve many of the goals of the Futurist artists. In particular we want to focus on the Futurists' concept of movement and their attempts to capture a sense of movement in painting, sculpture and photography. Next we want to discuss how digital photography can record pictures that are very similar to the Futurists' vision of depicting a world that is always in motion. For example, Bragaglia’s Photodynamism could be examined breaking his art into different phases and aspects such as camera movement, subject
movement and combined movement [1]. His “algebra of movement” very much anticipates Generative Art as generally intended [2]. In this paper we will quote from different Futurist writings. In addition we will quote from contemporary writings about the abilities of digital photography.
Next we will discuss the relation between an imagery of motion and Einstein's concept of space/time and the SpaceTime continuum.
Last we will make the point that drawing on Futurist ideas, digital photography can create a new kind of imagery in which space/time, i.e. the depiction of motion during a time period, can be presented both accurately and with expressive impact.
The installation will include an LCD panel showing images from Futurist artists, as well as from contemporary ones, comparing the results, including titles, explanations and photographs, as supplement to the paper.