BPN 1413 The unwrap party of my Bebook Mini 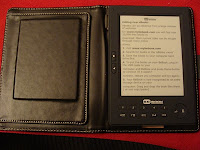 This week it was the last week to order an ereader for the company. I had a perfect working iLiad of the first series, but during one of my presentations on ebooks and ereaders, I handed it around and received it back broken. The screen was gone. I had had such a failure before and had to pay a hefty 250 euro (I had paid 650 euro for it to buy) to get the screen repaired. To pay another 250 euro was too much asked from the company’s budget, so I decided to look around.

Taking the position that I had to spend 250 euro to get my iLiad repaired, I decided to look for an ereader of less than 250 euro in The Netherlands. And I found the BeBook Mini, a 5 inch e-ink screen device. I paid 199 euro, including VAT for it, to ebook.nl. Today I saw it advertised with a physical bookshop for 189 euro. The only difference with my order was that the cheaper one did not have an ebook voucher of 30 euro with it. But the 30 euro voucher is not the greatest gift as you have to spend it before the end of this year. Not even five full working days to go!

The Bebook Mini arrived in time for Xmas unwrapping. In fact it arrived on the same day as the black cover, which I also ordered, did. Together the ereader and the cover make a nice delicate ensemble. For me as an ex-theology student, it looked like the missal under the printed books.

But then the frenzy work to get the Mini going started. The first thing was to have the Mini 12 hours on a USB cable linked to a PC. It looked a lot to me, but so said the quickstart guide to the BeBook Mini ereader. But looking closely to the guide and the material delivered I deducted that this was most likely, if you had to put the battery in the ereader yourself (you even got a small screw driver delivered in the package). In my case the battery was installed and the user guide could be even read on the screen (a feat the iLiad could not do with its first edition).

So after the 12 hours of loading, I started to link up the ereader through a USB cable to one of my PCs. And I did not get it to link, even not after following meticulously the user guide. Then I linked the ereader to another PC. No result. After trying several times it dawned on me that the cable might be defective. So I looked in my cable collection for a similar USB cable. I found one and started the whole procedure from the start. First on my Vaio. No result. But when I linked on to my recently acquired Acer netbook, it worked. Both computers take USB 2.0 cable connections. My conclusion: BeBook had delivered a faulty USB cable.

So I sent an email to the help desk. And another day was lost on just a simple installation. When I received the iLiad, the unwrapping party was turned into a search party for the on/off knob. The BeBook Mini does not have a real obvious on/off knob either, but it is on top of the device and on the right side and cannot be confused with any other knob.

Looking at the ereader there are two thoughts hitting my mind. The ereader presents the text straight up. There is no facility in order to read the text landscape, which could be interesting in case of some novels and essays with short sentences of a discussion. This facility brought me to the second point. Apple would have undoubtedly put in such a facility as is shown in the iPhone. But the screen of the Mini is larger than the screen of the iPhone. The iTablet or iSlate of Apple, supposed to be out on the market by March or April next year, is said to have a 10 inch screen.

My conclusion on the state of ereaders is that the unwrapping party is still not a joy.