The year is almost over and looking back I am impressed by the inroads made by ereaders and electronic books. Of course Kindle had made impressive inroads already, but only in the US. And now the fight for market share has begun. Barnes & Noble launched the Nook. In neighbouring Canada a new entrant Kobo is starting up dotted with 16 million US by amongst others Borders. But in Europe, Amazon.com has not made any impression and still does not do so.

In Europe, it is Sony which started up the wave. In The Netherlands Sony and Bol.com teamed up successfully and made a dramatic start. The aim was to sell 10.000 units before the end of the year. And they did sell more than 10.000 units. In fact the Sony ereader was and still is the favourite item in the consumer electronic goods, leaving netbooks behind.

But the Sony/Bol.com combination triggered also other brands of ereaders such as Bebooks, Hanlin and Cybook to start selling. In fact the action by Sony/Bol.com set off an action among Dutch bookshops, where ereaders were met with a lot of expected scepticism. Yet when potential buyers showed up, the tradesman in the bookseller would loose all reservation.

The introduction of ereader in The Netherlands has had five effects on the Dutch ebook market:
a. The price of ereaders has been lowered under 300 euro and the Price will even drop under 200 euro in 2010.
b. The publishing format has been standardised on the EPUB format. It is now the official format and publishers and distributors using other formats offer now also EPUB.
c. EPUB carries DRM limitations, but a liberal regime is offered: a buyer can share the ebook with four friends or copy it onto four platforms.
d. Publishers are getting more eager to publish an electronic counterpart together with a printed edition.
e. In the Netherlands printed books have a fixed Price for cultural reasons. But for ebooks the price has dropped 10 percent on average. The price would have dropped more if the VAT had been lined up with the VAT of printed books, which is only 6 percent instead of 19 percent. (The Spanish government has announced plans to slash value-added tax on electronic books to the same low level as printed books, from 16 percent to 4 percent). 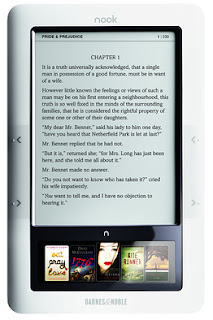 BTW The price of ereaders will drop even under 150 euro, I am convinced. Looking at the Nook of Barnes & Noble it is clear to me that this ereader with two screens of digital paper and LCD could have been cheaper by leaving the useless colour mini-screen out.

So ebook and the ereader will become a consumer item for the book reader next year, while the larger ereaders will start a fight for their share of newspaper market, on which Kindle and Irex DRS are already players with Hearst waiting in the wings.