On January 28, 1980 the Dutch PTT made the name for the videotex service public: Viditel (see with the help of the telephone. The service would be launched during the holiday season. The date was set for Thursday August 7, 1980. 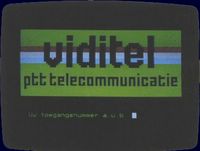 The launching meeting was planned in a PTT office at the Beatrixlaan in The Hague. The minister of Transport and Communication, Neelie Kroes (the present EC commissioner) was to open the service. But as she was on holiday in the North of the Netherlands, the PTT had offered a link to the yacht. When the moment supreme was there, the television cameras were started and drew so much electricity, that the lights went out. This was an ominous sign for the future of the service. The 8 o’clock news that night had an item on the launch of Viditel, lasting 3 minutes with an interviews of an PTT director and Wim Stokla, the project manager of the Teletekst service.

In order to pre-empt the chicken and egg problem, of not enough equipment (users) and too little information (information providers), the PTT requested from every information provider to bring along a client in lieu for 50 pages. The user would have to pay for his own equipment; a colour television set with built-in teletext chip (ca. 1500 to 2000 euro) and modem (subscription of 4 euro per month). The user would also pay for the telephone connection.

The service was launched with 150 service providers like the publishers VNU, Kluwer, Wegener, Tijl Data, the Dutch AA service ANWB and the retailer Albert Heijn. There was the first job vacancy service Jobdata of VNU Intermediair, a real pageview getter, which was killed in 1983 by Rob van den Bergh (now CEO of VNU). And the national airline KLM got competition from the ticket price comparison service of the travel shop Ad Latjes. ANP was present with its wire service. Krantel, a consortium of newspaper publishers, explored the new medium; it divided its site in categories like Netherlands, Abroad and Finance and when news was lacking, it read on the page: TODAY NO NEWS. A similar problem showed up with the Boekdata, book information service; the site showed a category Titles published today, which some days read: NO TITLES TODAY.

The excitement in the first months was great. Mr R. Post of Werner Electronics said in an interview with a trade magazines, that the company would sell 5.000 decoders in 1981. But this enthusiasm died down. The number of users grew slowly; there was an increase of business users, but hardly an influx of residential users. When the first year of Viditel ended in August 1981, there were 180 providers and 3.000 users. As for the providers, they had to pay from that time onwards; more than 50 service providers left the service. But surprisingly the PTT showed positive figures in the autumn of 1981; these figures were to reassure the service provider and attract more user. This trick was discovered by the editorial staff of Media-Info and lead to an intensive discussion with the PTT Viditel bureau about pumping up the figures.

The inflated figures did not help and it was clear that Viditel had a difficult road to go, as the users were not attracted in droves. So other contingency plans had to be drawn up. Videotex distributed over cable was proposed as an attractive way; yet the technology would still have to be developed. A real impulse came from the Postbank that started electronic banking in 1986. By September 1989 Viditel as a public service was terminated and replaced by Videotex Nederland.

Why did Viditel fail? A lot of reasons can be offered. People were not used to electronic information distribution nor exposed to the value of electronic information. Also the confusion between teletext and videotext did not help. The perceived incompatibility of the upcoming PC and videotex technology did not contribute. The fact that the technical PTT was the manager, operator and promoter of the information service, was a handicap. The service was very expensive for households and not too cheap for professionals.

Yet Viditel was the first public online service in the Netherlands, open for 24 hours a day, 7 days a week and 365 days a year; this in itself was a service innovation for a country with no Sunday papers (at that time) and a country where bakeries are (still) closed on Sunday.