What is the score on micro payment

Once a month I prepare a free English language newsletter, the Content Market Monitor (CMM). The newsletter was part of the EU funded project ACTeN (Anticipating Content Technologies Needs), which ran from 2002 till 2004. I continued the newsletter after the project, as we had a nice list of some 1700 subscribers in 92 countries and a running publishing system in Romania. The newsletter contains 20 articles and a variable number of announcements. As I will be abroad in the next days, I will have to finish it before tomorrow morning and mail it to Romania where Ioana will publish the newsletter and mail the lead tests of the articles to the subscribers. 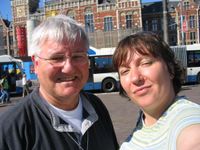 This is Ioana (right) from Romania in front of Amsterdam Central Station, when she visited the Netherlands earlier this year

Putting together the newsletter is a nice exercise during which surprises turn up. This time one of my sources drew attention to an article on micro-payment. It has been written by students of Twente University in the East of the Netherlands. The article did not get any attention in the Dutch e-magazines. The paper contains an overview of first and second generation micro payment systems and compares their key characteristics to determine their success or failure.

To me, micro payment has fascinated me from the beginning of online. Well you want to pay for a newspaper articles or for a song or a scientific article from Elsevier’s ScienceDirect database (which is still impossible, but they probably save this option when bad times hit the scientific world) and want to do it electronically. Why not? But it is not as easy as that. People will have to trust the methods and banks should be less conservative. But read the article. If you want to receive the newsletter, go the ACTeN site and register yourself for the Content Market Monitor.