The first signals of broadband in the Netherlands came about in 1982. PTT Telecom organised the first glass fibre conference in the Netherlands. Also the project South-Limburg indicated a conversion from smallband to broadband. But it took till 1989, when the first step to increase speed over coax cables was made: ISDN was introduced. When Internet was introduced, there was a clamour for faster lines. And sometimes project ideas sprang up. Like in April 1994, when Cap Gemini proposed a ‘broadband’ in the eastside of Utrecht. Companies and households would be linked to a fast network. But the project fell through as Cap Gemini wanted to “leapfrog in to cyberspace”; the only lasting result now is a not-for-profit foundation EPN founded in order to gain a "firm and balanced foothold for the electronic highway in Dutch society", not only for the benefit of the business community but also for that of the general public.

In 1997 KPN experimented with fast internet in the Amsterdam neighbourhood Sloterdijk. By 1999 KPN started its ADSL experiments on XS4ALL, which was eventually introduced by 2001. It was only then that a competition started up between the incumbent telco and new companies such as Circon and BBned. By 2005 more than 50 percent of the Dutch households had broadband (ADSL, cable or glass fibre). 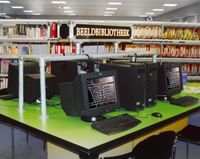 The cable companies were late in picking up internet and broadband. While everyone recognised that there was an infrastructure for households for the distribution of internet it started to work on broadband, the cable companies had trouble gearing up. Near The Hague the regional cable company upgraded its speed from 2Mbps to 15 Mbps in 2002; other cable companies did not follow. Presently Essent is researching a speed upgrade to 100Mbps by 2007 with the Finnish company Teleste. 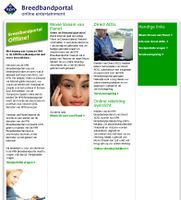 KPN opened a broadband portal with a variety of movies in 2003; in 2005 the portal was closed

It took a long time for glass fibre to come around since the conference of 1982. The first consumer broadband by glass fibre projects were set up by the Dutch division of Bredband Bolaget in Amsterdam in 2001. The company aimed at wiring the dwellings of housing companies, preferably apartment buildings. From that point onwards the discussion about the last mile, between the home and the coax or glass fibre cable, starts to spread. Telco KPN published its ideas in the Glass fibre Delta. The cable companies reacted negatively on it. But many a municipality (Amsterdam, Rotterdam, The Hague) wanted to take the lead in constructing a glass fibre network. But what the big cities were unable to realise so far, was done in a small village near Eindhoven, where 7500 households were linked to a glass fibre network in 2004.

Logo of the project Kenniswijk in Eindhoven

This amount is half the number of households in the region of Eindhoven, which are linked up to the glass fibre network in the framework of Kenniswijk. This project, which was selected in 2001 by the governments department of Telcommunication and Mail (DGTP), was to create an environment for a large scale experiment. The objective was to reach in 2005 a situation by which the developments of the Kenniswijk area would be two years ahead of the rest of the Netherlands. In this way a consumer market of the future would be created. Right at the start Kenniswijk had a problem as Bredband Bolaget went bankrupt. By December 31, 2005 the project will be terminated. The results are that 15.000 households have a subscription to the glass fibre network, 50 broadband services have been initiated and 100 broadband services are under development. Disappointment is there about the low number of 15.000 subscribers in a region of 47.000 households. The realised services and services under development still have to prove their commercial viability; already 11 services have been temporarily or permanently stopped.

Fabchannel, the music channel of the pop temple Paradiso, is a real broadband project (compliments of Europrix.nl)