For one of my projects I had to search Internet last night. I had to find information about the period before internet, between the sixties and 1990. Usually people will tell you that you have to search for ARPAnet, Roy Tomlinson, (the inventor of the @ sign in e-mail), Vince Cerf and Tim Berners Lee.

Not many people are aware that from the late sixties till the nineties there was online business, better known as information retrieval. In 1965 Roger Summit at Lockheed and Carlos Cuadra at SDC lead teams developing software enabling online database systems Dialog and ORBIT. By 1970 Carlos Cuadra at SDC developed the ELHILL software, to support experimental online database MEDLINE, the first dial up service in 1971. This was followed by Roger Summit in 1972 who made Dialog a commercially available online service with the educational database ERIC as its first offering.

In the seventies Europe followed with some of these services. The European space organisation offered the service ESA-IRS. In Switzerland Data Star was set up as a commercial service. In France the government ran Questel.

The services were also referred to as ASCII service. ASCII was an abbreviation of American Standard Code for Information Interchange (ASCII), the International Alphabet Nr. 5, which contained 128 characters such as capital and small characters, numbers and diacritical signs such as a hyphen. Late this character set was expanded to 256 characters and is known as the Extended Binary Coded Decimal Interchange Code (EBCDIC). ASCII was a reference to the presentation protocol. It meant that you saw on your screen characters in capital and small, numbers and diacritical signs like hyphens. The text started on top of the screen with a line of maximally 80 characters. The next line pushed the first line below until it reached the bottom of the screen.

Despite all the market experience, these information retrieval services had a hard time when internet came around. Internet was for many of these services a disruptive technology. Lexis Nexis became part of Reed Elsevier and it took Reed Elsevier some time before it geared up for internet. Dialog eventually ended up as part of the information services of the Canadian publisher Thomson. But a BRS just went down as online service, but transformed its experience with databases in a new information service Ovid, which was bought by Kluwer. 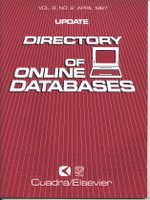 Last night I found Online Before The Internet. It is a nice series of 9 in-depth interviews with the pioneers of the information retrieval industry Carlos Cuadra, Roger Summit and Jan Egeland.
Gepost door Jak Boumans op 10:46 AM