Cruising around my bookmarks yesterday, I noticed that the EUROPRIX Top Talent Award (TTA) nominations have been published. After days of hot sizzling debates, the TTA Jury of 20 experts have nominated 22 projects out of 411 eligible entries. Also 20 projects have received a Seal of Quality. At the TTA Festival from March 1-4, 2006, the winners will be announced. 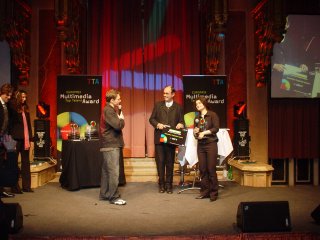 The awards ceremony in 2004: the Dutch winner Anya Shapira receives her award for the Interactive Projection System

The nominees will have their work showcased around Europe. There will be a catalogue with descriptions and screenshots of the projects. Also a DVD will be produced and of course the EUROPRIX Top Talent website will contain information on the projects. The nominees will be invited to Vienna in March 2006 to present their projects at the Top Talent Festival. This is a great happening for the students, young professionals and multimedia instructors. It all culminates in the TTA Gala when the winners will be announced and 11,000 euro in prize money will be awarded. This year the EUROPRIX TTA Festival is part of the events in the framework of Austria’s European presidency.

I am quite envious of the interest that the Austrian government takes in the multimedia and content industry, not only in their own country, but also in Europe and the world. They have their own award, the Statspreise, and they shell out money to organise the EUROPRIX TTA as a European competition. In 2003 and 2005 they supported also the World Summit Award. They also stimulate their own industry and have a industry guide, a register of multimedia companies with their names and addresses as well as their specialties. In 1998, 1999 and 2000 The European Commission showed also such an interest, but this withered away as money was destined for million euro devouring Intergrated Projects. These projects do not take in starters and small enterprises as multimedia companies usually are. EU Commissioner Viviane Reding should organise such a Europe wide competition and festival through her Media programme.
Gepost door Jak Boumans op 10:45 AM