Today the Multimedia Entertainment China Conference starts in Beijing. The conference will feature global industry visionaries, including Dr Michael B. Johnson who runs the moving pictures group at Pixar and Nicholas Negroponte, founder of the MIT Media Lab, among others. My Finnish friend Irina Blomqvist is one of the delegates. The Conference has been organised by CIMC Ltd and the Beijing Multimedia Industry Association (BMIA). 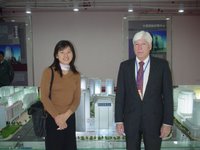 CIMC Ltd is a company based in Bejing and run by Mr Eldon Hylton (right) and his personal assistant Li Wang (left). When I was in Beijing in October 2004 she showed me around the forbidden city and the historical square of Heavenly Peace, where these days kites are being sold. The conference will be webcasted I am told on the Sohu website. 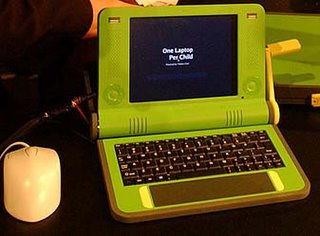 The first 5 to 15 million computers will be forwarded to China, Brazil, India, Argentina, Egypt, Nigeria and Thailand. They will be bought by the government or government agencies. Their colour will be frog green; the colour is selected in such a way that the computer always can be recognised as a computer belonging to the One Laptop per Child campaign and will not be stolen for commercial sale. 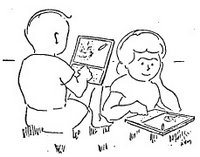 (When I was surfing for more information on this campaign I noticed that Alan Kay is on the board of the OLpC, the godfather of the laptops as he created the Dynabook, which defined the basics of the laptop and tablet computer, and is also considered by some as the architect of the modern windowing graphical user interface (GUI). In August 1972 he wrote the article A Personal computer for children of all ages.)