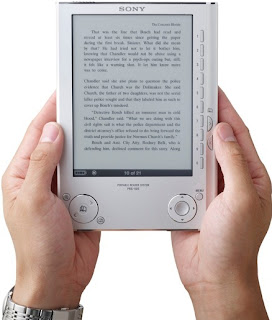 Today the Sony PRS505 arrives in the UK. It is an important moment for the UK and for the European continent. Sony will cooperate with Waterstone’s chain with 60 book shops. The occasion will also be sought by publishers to release electronic editions of their print books; noticeably Penguin has promised 5000 e-books.

The Sony PRS505 will not be officially introduced on the European continent. Regional Sony companies are free to introduce the e-reader and make agreements with local or regional publishers. In small countries the PRS505 will not actively be promoted, but project proposals will be honoured.

The introduction of Sony’s PRS505 in Europe is remarkable. For years kept the Librié e-reader only on sale in Japan. After this, Sony introduced the e-reader in the USA. In the States it met opposition of Amazon’s Kindle and to a lesser extent of the iLiad.

With the introduction of the Sony e-reader in the UK, Sony will find another chequered battlefield. Before Sony’s introduction only iRex Technologies had its wireless edition of the iLiad on the market. But recently iRex Technologies introduced an iLiad without the wireless facility. This edition will be the flagship of Border’s book distribution. Sony will not meet Amazon’s Kindle in the UK, yet. But it I expected that Amazon will have a European edition by next year. Amazon is said to be working on a German edition of the Kindle, which will be introduced in Germany in the first half of next year. (Amazon has denied that it is working on a student edition of the Kindle). In France Amazon’s Kindle will meet competition by Ganaxa and Cybook Bookeen.

By introducing the e-reader earlier than Kindle, Sony has prevented a monopoly by Amazon in the UK. Sony will distribute the e-reader, but not e-books. Amazon sells Kindle in the US together with e-books, charging publishers a commission of 60 percent of the sales price. In the UK the publishers can deal with (e-)book distributors like Waterstone’s and Border’s as well as Amazon. In Europe, it looks like Amazon will be able to strike in Germany. In France Amazon will have a hard time, given its national chauvinism for products, produced in France.