This is the first instalment of a series of articles dealing with the pre-internet period, ranging from the seventies till the nineties. The industry which came about catered to information retrieval for professionals such as scientists and business intelligence people, messaging for business, but also to consumer services. The USA developed in a different way than Europe, which went its own way in videotext. By 1985 the online industry was in for a surprise with CD-ROM; this was frozen online. In 1991 internet was introduced, it brought unity in online with the HTP/IP protocol; it was also the beginning of a new mass medium.

For many people online is synonymous to internet. However the origin of online had nothing to do with internet or with its predecessor ARPAnet. This network was a military project set up by the US ministry of Defense. The study for the network was launched in the middle of the Cold War. The network was intended to survive rocket attacks from Russia. In the conventional telephone network a rocket hit would cut out the entire network. The ARPAnet should keep working for the part not hit. This meant another network architecture and protocol, in which the network was not dependent on a central computer. By 1969 the network became operational and started to work with computers of some Californian universities.

But at the same time an important development took place for telephone networks. So far networks had been designed for voice traffic. In fact the networks were not very suited for data transport. So a new environment for transmitting data had to be developed. In the late sixties packet switching was introduced. With this method information from databases or e-mail messages were chopped into small data packages, which could be sent to a destination through various routes and even networks. In the fall of 1971 the American engineer Roy Tomlinson transmitted a first electronic message. When asked after 30 years what the content of the message was, he answered that it most likely was the first line of Lincoln’s Gettysburg Address; the message was written in capitals. (Tomlinson happens to be the inventor of the @ sign in the e-mail addresses). The special packet switching networks, which were set up on the basis of this technology, formed the basis for the new online industry with information and e-mail services; mind you, at first information retrieval and e-mail were offered separately by separate companies.

Online
In the sixties the computers, mainframes and mini-computers, could be connected with each other by modem (modulator en demodulator), a device as large as a VCR. It was originally intended to modulate the data signals for the voice network on the one side and demodulate the data signals at the other side. But this was not easy due to the incompatibility of operation systems, hardware and telephone lines. Special lines were leased for the data traffic in order to prevent a bit from falling over.
Technically it was already possible in the sixties to exchange data online. Yet it did not really pick up as it was easier to exchange punch cards and magnetic reels. But online got a political impulse, when John F. Kennedy became president in 1961 and promised the American people that the USA would be the first country to put a man on the moon. This promise accelerated the development of online. Space companies like NASA and space ship builders like Lockheed has to find new ways to make scientific, technical and medical literature accessible. On January 10, 1963 president Kennedy released a press statement, announcing the coordination of scientific, technical and medical information. A committee was formed with Alvin M. Weinberg as chair, which produced the report Science, government, and information: the responsibilities of the technical community and the government in the transfer of information (1963) in three months.
At NASA and a scientific institute like the National Library of Medicine abstracts of scientific, technical and medical articles were already produced for print magazines and the punch tapes for the text files were fed into the computer. The abstracts were indexed and made available for desk research. An employee of the institute could retrieve information through the internal network by keying a key word or a combination of keywords, upon which the index lists were checked for a match. The result was sent to a screen or printer. The step from the internal network to the external network by which researchers could use the abstract databases for their automated literature search was only logical.

Technical ingredients
For the online service the following technical ingredients were required:
1. Host computer (server we would say these days): a central computer with a communication program and an information retrieval program. These computers were mainframes or mini-computers. They worked on the principle of time-sharing, which made it possible for many searchers to start search actions and retrieve information. Although it looked like all searchers were online and actively searching together, they all got individually time assigned to get access to a file.
2. Telephone network/data network. Online information retrieval started over the Plain Old Telephone network (POT), but switched from 1971 onwards to data networks with packet switching. 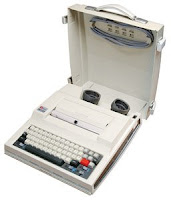 3. Modem (moduleren en demoduleren). a device (de)modulating zeros and ones to sounds in the POT network and vice versa or transferring bits and bytes from A to B.
4. Terminal: a terminal had several forms as no PCs existed yet. So a terminal could be a key board either with a fixed or a separate printer. It could also be a screen and a keyboard, but without any intelligence; what came on the screen could be sent on to the printer. And there was a portable terminal consisting of a keyboard and a thermal printer.
5. Protocol: the communication protocol between the central computer and the terminal consisted of ASCII (American Standard Code of Information Interchange), a set of 128 agreed letters, figures and symbols. It was no presentation protocol telling how a screen should be made up, but it was purely intended for texts. On monochrome terminals screen, which were grey, green or amber, no pages with texts were shown, but lines of 80 columns which rolled from top to bottom.