Also Europe was very early active with online. In 1969 Lockheed performed an assignment for the European Space Agency (ESA) in Frascati (Italy) on behalf of Lockheed. The company installed the NASA database RECON. From 1971 ESA started as ESA/Information Retrieval Services the first online service with NASA RECON en Chemabs databases for scientific and technical research. The service could position itself thanks to the cheap telephone tariffs of Tymnet.

The ESA initiative spawned online services in many European countries. Usually it were the governments which stimulated the usage of online services for scientific and technical research.

In Western Germany the government published in 1974 a program for the promotion of information and documentation. One of the plans was to found a Fachinformationszentren (FIZ) for the disciplines environment, technology, patents and research. FEZ started in1977. In 1978 the online service INKA was launched and in 1982 it already had 40 databases, among which the medical database DIMDI. In 1983 a distributed online service was launched under the name STN International; it linked the FIZ databases, Chemical Abstracts in the USA and the Japan Centre for Science and Technology (JICST).

In France the scientific and technical host Questel was founded in 1975. In the following years the online service has specialised in patents, IPR and brands databases. In 1994 the US online service Orbit was acquired from the legacy of Robert Maxwell’s media empire.

The UK was seen in the seventies as a stepping Stone to Europe for the US online information services. Due to the success of the ESA services, Lockheed’s online service, in the meantime named Dialog, saw possibilities to sell their databases in Europe. Roger Bilboul with his company Learned Information (in 1994 bought by VNU) was asked to be the representative for Lockheed’s Dialog in Europe.
BOC DataSolve was from origin an UK company, the computer department of the this multinational. The computerised documentation department developed itself into a an online information service which was sold to the television and record company Thorn-EMI. The service developed into a media host. It contained the complete full text of for example the Financial Times and the radio broadcasts such as BBC World. All those texts, including those of the newspapers, had to be retyped. In 1984 the Financial Times bought the service and changed its name to FT Profile, which was bought by Lexis/Nexis.

In 1979 BPCC, the media company of Robert Maxwell (see photograph), started to profile itself. Through its scientific publishing company Pergamon, Maxwell bought the rests of the bankrupt Infoline to form the scientific online information service Pergamon-Infoline. In 1987 the US service Orbit was added and continued as Pergamon Orbit Infoline to be divided up in 1991: Orbit was acquired by Questel and the rest was sold off. 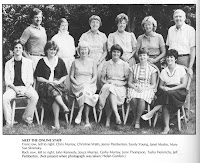 The online industry in the US got its recognition in 1977, when Online Inc. (see team on photograph) started the magazine Online and organised a first online conference and exhibition. The conference and exhibition were mainly visited by librarians, online intermediaries and business intelligence users. The business grew fast from 1977 onwards as PCs were introduced by HP and Apple.

Online got a face in Europe when Learned Information started the magazine Online Review and the annual Online Conference in London in 1977. This conference and the exhibition were aimed at documentalists and online desk researchers. In 1980 online in Europe got a stimulus from the European Commission with the launch of the Euronet Diana network (see photograph). Through this network of the European Economic Community the European countries were connected and ready for a European online industry. Besides offering a network, the European Commission stimulated the development of databases with grants. In 1983 VNU Business Publications in Londen received a grant to develop IDB Online, the first daily electronic newsletter for the computer industry. 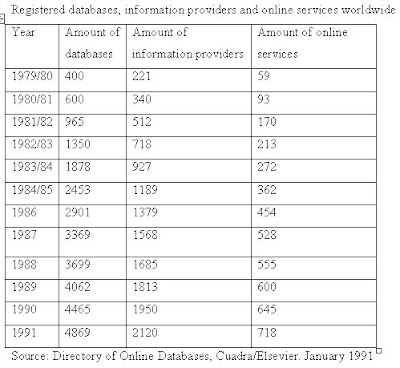