Online was not exclusively the domain of scientists and business men. Small and middle large companies as well as well to do private persons were interested and looked for timesharing services from 1969 onwards. However, also consumer services were set up some 10 years later, from 1979 onwards.

Some companies with a computer saw an opportunity to make money by selling idle computer time at night. It was the start of consumer online companies. In 1969 the online service Compuserve started in this way. While best known for its consumer services division, the CompuServe Information Service, CompuServe was also a world leader in other commercial services. Another consumer online company was The Source, which offered e-mail and chatting from 1979 onwards. Compuserve started to offer e-mail in 1979 and chatting in 1980. 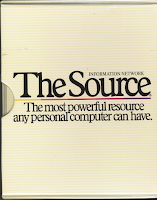 The Source (Source Telecomputing Corporation) started service in 1979 as an online service, one of the first such services to be oriented toward and available to the general public. Intended for use with 300 bit/s and 1200 bit/s dial-up telephone connections, The Source was text-based for most of its existence. At its peak, The Source had 80,000 members. During much of its existence it charged a start-up fee of about $100 and hourly usage rates on the order of $10 per hour. It provided news sources, weather, stock quotations, a shopping service, electronic mail, various databases, online text of magazines, and airline schedules. It also had a newsgroup-like facility.
In 1989 Compuserve acquired The Source, which turned out to have many ghost accounts and dismantled its competitor. Eventually in 1997 the pioneer consumer online service Compuserve was acquired by America On Line (AOL)

Prodigy Communications Corporation (Prodigy Services Corp., Prodigy Services Co., Trintex) dates back to 1980 when broadcaster CBS and telecommunications firm AT&T formed a joint venture named Venture One in Ridgewood, New Jersey. The company hoped to introduce a Videotex-based TV set top device that would allow consumers to shop at home and receive news, sports and weather. After concluding the market test, CBS and AT&T took the data and went their separate ways. In 1984 Prodigy was founded as Trintex, a joint venture between CBS, computer manufacturer IBM, and retailer Sears, Roebuck and Company. CBS left the venture in 1986. The company's service was launched regionally in 1988; a nationwide launch followed in1990. It was the second largest online service provider, with its 465,000 subscribers trailing only CompuServe's 600,000. Under the guidance of editor Jim Bellows, Prodigy developed a fully staffed 24x7 newsroom with editors, writers and graphic artists intent on building the world's first true online medium. The initial result was that Prodigy pioneered Internet portals - a single site offering news, weather, sports, communication with other members, and shopping for goods and services such as groceries, general merchandise, brokerage services, and airline reservations as well as lifestyle features, including popular syndicated columnists, restaurant surveys, Consumer Reports articles, test reports and games for kids.

AOL (formerly America Online, Inc.) is an American global Internet services and media company. It was founded in1983 as Quantum Computer Services and franchised its services to companies in several nations around the world or set up international versions of its services. AOL offers millions of customers around the world to access the world's largest "walled garden" online community and eventually reach out to the internet as a whole. In January 2000, AOL and Time Warner announced plans to merge and the deal was closed on 2001. AOL began life as a short-lived venture called Control Video Corporation (or CVC), founded by Bill von Meister. Its sole product was an online service called Gameline for the Atari 2600 video game console after von Meister's idea of buying music on demand was rejected by Warner Brothers. Subscribers bought a modem from the company for $49.95 and paid a one-time $15 setup fee. Gameline permitted subscribers to temporarily download games and keep track of high scores, at a cost of $1 per game. The telephone disconnected and the downloaded game would remain in Gameline's Master Module and playable until the user turned off his console or downloaded another game. In 1985 launched a dedicated online service for Commodore 64 and 128 computers, originally called Quantum Link ("Q-Link" for short). The joint venture with Time Warner has not delivered the content engine from Time Warner to AOL,so that it could become a real new publisher. 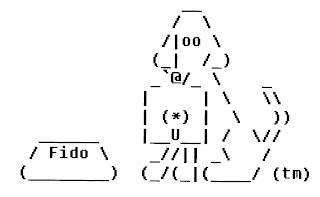 For the real amateurs the electronic messaging service Fido net became available. This e-mailsystem was developed by the American Tom Jennings, who named the network after his dog (see the opening screen of Fido-net). In 1984 he succeeded to realise a computer network for PC amateurs, which was a fraction of the subscription to The Source and Compuserve. The core of the success was in the bulletin board software. Copies were multiplied and distributed freely to PC amateurs as long as they wanted to function as a system administrator. In this way more nodes in the network were created along which messages could be sent at night against tariffs for down hours. Amateurs could call in at a local telephone rate. The messages could also be sent to other networks. But no guarantee of receipt was given. When internet was introduced the population moved over from bulletin board systems to internet without any troubles.