It is clear that the e-reader market is moving. After the demonstration of the Plastic Logic 10,2 inch screen and the introduction of the 10,2 digital e-reader of iRex Technologies (which received a mixed reception; see USA Today’s review) opening up the business sector, the fight over the consumer market will bring a hot Christmas sale. Sony will introduce a new version of the e-reader, the PRS-700, in the USA next month at a price of 400 US dollar. This might be the trigger for Amazon to release its new version of Kindle.

The PRS-700 is the successor to the PRS-505. The reader looks much like the older reader. It has roughly the same dimensions, weighs 10 ounces and is equipped with the E Ink digital paper screen.
The PRS-700 can hold up to 350 books with built-in, internal memory, but eager readers can expand that amount by using a removable memory stick. (These days you can hold more books on a stick of 16 GB than the library of the Paris Sorbonne University in 1750 possessed).
The PRS-700 has quite some differences with the PRS-505 and other digital paper products: touch screen, virtual keyboard, six font sizes and LED lights. Contrary to the PRS-505 the new version has a touch screen. The display gives readers the option to work with a stylus and flip pages with their finger. The user can call up a virtual keyboard that allows users to search for terms, highlight words and make annotations (marginalia). Personally I think that the virtual keyboard, which I know from the iLiad, is a nuisance. And for anyone who needs bigger print to make it easier to read, the PSR-700 has six font sizes to choose from.
A principal difference with all other digital paper readers is the built-in front light in the PRS-700. So far the advertised advantage of digital paper was that the user can read the screen in bright sunlight. But now LED lights have been mounted in e-reader to assist in bright light situations, ensuring that the users will not have a problem seeing the text while the sun is shining brightly. This is one explanation. I read also another explanation for the LED lights, namely that the lights are there to ease the strain on the eyes of the users. Personally I am wondering about this front light feature; so far I have used paper digital in bright situation without having strained eyes. 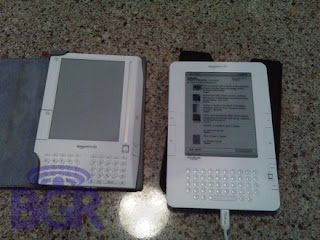 There has been a rumour in the market that a second version of the Kindle is being expected. Speculation about the presentation determined a launch before the Christmas sale or at the launch of a T-Mobile electronic newspaper in Germany. The Boy Genius Report has gotten hold of some photos of a device that appears to be the Kindle 2. From the photographs it looks like Amazon has tried to address some of the criticisms of the Kindle, which it got after the first presentation almost a year ago. Most of this criticism was on the design of the Kindle and off-white colour. The inside man of Boy Genius Report says that “the device is basically the same size as the older model, but is thinner and has "a slightly heavier feel, and it feels much sturdier." The keyboard has been redesigned. The new model uses the same cellular Sprint EV-DO network for downloads. But: no word on the launching date and the price.