BPN 1256 An e-Content workshop in Bahrain

I was in Bahrain again this week for the seventh time. I am becoming a regular visitor there, it looks. I was invited by the GFB, a conference organiser. The company had on behalf of the Bahrain e-Government Agency developed the Electronic Content Development workshop.

The Bahrain e-Government Agency is real on the ball in the Gulf area with developing e-Government services. In May of this year, it held an international e-Government Forum and an e-Government contest (see my postings from May 12, 2008 till May 26, 2008). Recently the Government of Bahrain became the first country globally to sign an agreement with Microsoft to deploy its Live@Gov suite of solutions for all citizens. 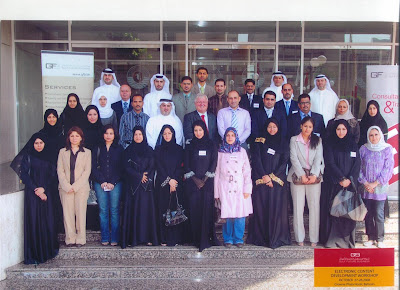 It was a two day workshop, running from early morning till 14h in the afternoon. The first day was rather theoretical on the concept of e-content, cross-media and user generated content. But on the first day I also changed over to criteria for good content. The second day we went into e-Content competitions like the Bahrain e-Government Award and the World Summit Award. I was helped very much by the e-Government archive of the World Summit Award, which has 15 examples of excellent e-Government entries.

It was a short round trip from Amsterdam to Manama. But there was still some time to exchange ideas with some people. One of the exciting ideas is the e-Content Hub project for the Arab world, which is under development. It is an exciting project as in the Netherlands a Content Hub (sorry in Dutch) project is also coming on stream. Of course, the projects will differ in detail and execution, but they will have common aspects. In Bahrain the e-Content Hub is seen as a future economic activity; once the oil well will dry up, but the e-content well should have been brought on stream by that time.

All in all, it was exhausting, but exciting.