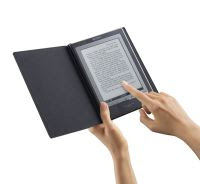 With the arrival of competition in the e-reader field in worldwide and especially in Europe, the issue of e-book distribution should be addressed. For the US and UK market there are already a number of e-book outlets. And Sony has even fine-tuned its US online e-book shop and is benefitting from the sales of its e-readers and of the sale of e-books (which boils down to the iPod model). But what about the continental European market for e-books. Let us look further in two years.

I purposely address the European continent as the UK benefits from the language similarity with the USA. But the European continent is a fragmented market due to the many languages. Of course, if there are any e-books in a particular language, it usually will be sold in the region where the languages are spoken. Four main language areas are German, French and Spanish and Italian. So German e-books have as a footprint: Germany, Switzerland and Austria; French e-books have France as sales market in Europe with a Francophone market in Africa, America and Asia (in countries like Vietnam). The Spanish language has Spain as beneficiary market with a large market in South America. And Italian e-books have Italy as sales area. All the other European languages including the Eastern European languages are usually restricted to the region and perhaps some small extra territories.

So for Germany, France and Spain there are real opportunities in the European regions or elsewhere. But for the smaller language areas it will be hard to establish a portfolio of e-books and set up a distribution system. A good example is the book loving country The Netherlands. The portfolio of Dutch books is not great. The last count was over 337 e-books and there was an estimate that by the end of the year there would be 500 e-books. So far the country has several download outlets, usually feeding on the same database ebooks.nl with 85.000 e-books. Besides the Dutch national pride, the iLiad, there are other e-readers available such as Cybook, Hanlin and Jetbook, while next year the Sony e-reader PRS-505 will be available. So the sale of e-books is picking up speed and something is brewing in the distribution channels.

The Netherlands has had a very good physical infrastructure for books. The network of specialised bookshops has a logistic service for delivering books in 24 hours, provided by the central book warehouse, called in Dutch Centraal Boekhuis. Presently the Centraal Boekhuis still delivers printed copies, but the management is thinking about the challenge of e-books. Accoriding to PCW Entertainment and Media Outlook 2008, the turn-over of e-books will grow from last year's 9 million euro to 25 million euro in 2009. This perspective should be interesting enough for Centraal Boekhuis to set up a central e-book database and download service. It could be the management says, but this will only materialise in one or two years. The management can also buy the present ebook.nl distribution service as well as an e-book production service. Whatever choice they make, they (that is: the publishers) will have to invest in a at least a download service.

Of course you might hope that the Dutch download service will have an international link, so that you can buy English books, but also books in languages like German, French and Spanish, as many Dutch people have at least a third language, besides Dutch and English. Not too many French people will buy a Dutch language book, but more and more Germans are speaking and reading Dutch. So far Amazon has three subsidiaries in Europe, which can deliver the service. But for the smaller countries there is no proper infrastructure. Either Amazon will jump into that marketing opportunity or a European network of national download services will cover that need.