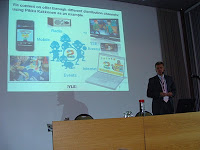 The second plenary was an interesting subject, be it presented too slowly by Lauri Kivinen, the CEO of Yle. He started presenting the basic stats of Yle. It is a broadcasting company, which started in 1926, now serving 5.5 million Fins with 4 TV channels, 6 radio channels and the Yle.fi portal, but also with events, mobile and big screens. The company now also has on demand television and radio, but this is not very popular yet. Presently the company is restructuring itself and aiming at cross-media programs. On November 1 it launches a children’s series, using all the media available. Around that same time the company will launch a series with ten instalments on Rock ‘n Roll, presenting it on TV and radio and drawing heavily on archives. The objectives for the coming months are:
- few services, but richer content;
- network journalism;
- ubiquity;
- unlimited mobility;
- services for young adults are growing fast.
New to the broadcast business is the top of the broadcast pyramid. On the bottem are the direct broadcasts, in the middle the on demand programs and on top the social media with which the audience can share, link, mesh and participate. 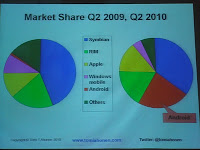 The tracks were concerned with: new mobile ecosystem; cloud computing; Mindtrek launchpad and more academic sessions. I joined the new mobile ecosystem. Not that I could do much with the information, but you can hear what the companies are going to do next month. In the presentations the systems Android by Google, Symbian 1.3. by Nokia and the iOS by Apple. Google gives Android away for free in order to grab the market. Google gets 30,5 pct of the mobile world. As far as the future, the bet is on Symbian and Anadroid. The iPhone, also called Jezus’ phone, has less of than a Nokia. Real potential will have the Bada operating system. Remarkable was the presentation of Tomi Ahonen, an excentrix Fin, who proves that less iPOD has been sold. He states that Apple works with perception of market share rather than the actual figures. 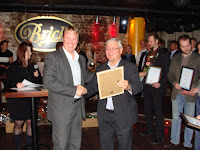 In the evening there was the traditional reception in the monumental town hall in the center of Tampere. In the reception room there is a beautiful chandelier. After a speech the glasses were filled and finger food served. After the reception we negotiated the corner to the right and got to the disco Brix. There was the Mindtrek party: music, drinks and dancing till late in the night. There was also a reward ceremony of several contest. I was asked to be the representative for the World Summit Award Finland 2010 and the World Summit Award Mobile Media Finland 2010 and hand the certificates to the winners.