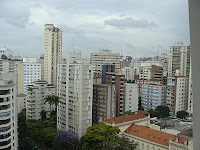 After the wrap-up meeting the time to flight started. I had made an appointment with Marcello, a friend and colleague of the World Summit Award. We had been in the first World Summit Award jury in Dubai in 2003 and were able to keep track of him through Facebook. So when the flights were fixed for Sao Paolo we made an appointment to meet each other after the conference was over. As I was a novice to Sao Paolo he proposed to have lunch and offered a few place. I opted for a traditional meat restaurant, as I associate Brazil with meat. An experience it was. You get to a table and you start with the salad bar. Of course be a novice in such a restaurant you heap too much salad on your plate, leaving less room for the various cuts. On your table you have also a token, which can be switched from red to green. Green indicates that the meat boys can pass by. Red means that you are filled up and do not want to see the meat boys any longer. Those meat boys pass by with a skewer of a special meat cut. Some six different meat cuts are presented to you and you get them offered as rare, medium and well done. It was a great experience; happily enough I will have to fast tomorrow in the plate and can compensate.
After the meat feast, Marcello brought me to the apartment of Cid. We had to cross through the whole city and that is fun, if you do not have to drive. If you have to, you will have to be careful with the many motorbikes that drive beside you putting their lives in danger.
Sao Paolo is an extensive city with more than 20 million inhabitants in the metropolitan area, so it takes time to come from the one end to the other. From the airport to the hotel for example it is 36 kilometres and if you are lucky you see traffic jams at the other side of the road. Of course Sao Paolo being also famous for its crimes such as hold ups at gunpoint at the traffics lights, has stimulated the use of helicopters. So the major hotels like the Sheraton, but also businesses have helipads on top of the roof; daily helicopters land on it, so that a big boss or rich guy or girl can safely start his/her business meeting.
So Marcello dropped me off at Cid Torquato’s place. In fact Cid stopped right behind us. And Cid got to meet Marcello again after many years. They had been in the same school together. Marcello was a jury member in the first edition of the World Summit Award in Dubai in 2003, while Cid took over as a jury member in the second edition in Bahrain. It was an historic meeting. I think they said that they were going to meet again. 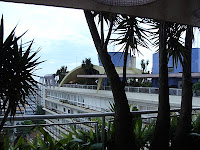 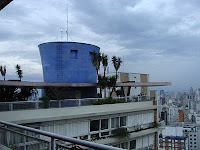 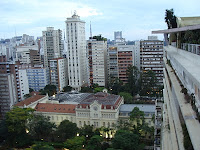 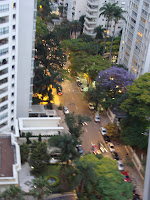 The apartment of Cid is situated in a beauty building. When you have been let in by the security guard, you  immediately get the feeling that it is a building by the French architect Corbusier. The timing is roughly right, but the architect was a Spaniard, but definitely a follower of Corbusier. The whole building breathes the mode of cocooning. There is a swimming pool; in fact it was the first one in an apartment building in Sao Paolo. The apartment building has a bar and a barman for the 140 families. There are more common rooms for the people living there.
But the top of the 19 stories building is marvellous. The view is great, although the skyline of Sao Paolo is not very interesting. But the top itself is a beauty with a garden, a plafond with holes in it through which you can se the sky. There are several cosy niches to sit and enjoy the view.
We had a nice get together in Cid’s bar, which is decorated on the corridor site with French lily symbols. And by ten it was time to say goodbye to Cid. I had expected a very emotional meeting up with Cid. And in the end it was an emotional meeting, but in the good sense. Cid met his soul mates of the World Summit Award again and after three years we could team up again with him and help him in the mission he has at present. Seeing the intensive way he has handled the preparations of this conference, I see him going to do even greater things as long as he is going to be assisted in his handicap. (BTW Being handicapped in South America is an expensive business; Cid’s favourite black humour expression is: Handicaps are for the rich!).
The farewell was intensive as we hope that we can work together with Cid again. Hopefully we see him around World Summit Award events.
BPN 1448
Gepost door Jak Boumans op 6:32 PM