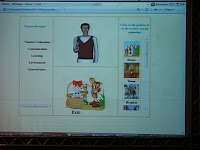 Looking back over the conference in Sao Paolo, I discovered a rather unique project. A telephone service translating SMS messages into MMS illustrated message in the form of sign language for the deaf. The system is being developed by the Tunisian laboratory of the University of Tunisia, the department of Informatics by a team led by Dr Mohammed Jemni.

The lab is working on sign language for the def already for 5 years and has input from more than 50 PhD students.

The lab handles many projects for the deaf, but significant are the project Websign and project MMSsign. These projects are in the mainstream of accessibility. For deaf people internet is hard to access. Sites are 56 percent in English, 7,7 percent in German, 5,6 percent in French and 5 percent in Japanese. As for sign language the percentage is not know, but what is known is the fact that 80 percent of deaf people lack education and hardly get into touch with internet. So the sign projects are not aimed at internet but on telephone.

The lab uses an open source for the automatic translation. Text is translated via a dictionary construction to a message. A multilingual interface can be used to translate messages in various languages; an application which can also be useful for non-deaf people. Websign will soon move to internet. 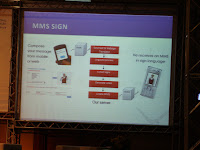 MMS sign send a message to a telecom provider via a short number. At the provider the messages are made into video images through VRML in 3D. So the text messages become multimedia messages thanks to the avatar. So if you have an appointment with a deaf person and you can not make it in time, you can send a text to the effect to the provider. The deaf person gets the message on his smart phone and is alerted through vibration. An avatar appears and the makes the appropriate signs to convey the message.

It is a great application as such and even more as it is done in open source. The system can handle more sign languages. Upon the question whether the Tunesian lab could handle a Portuguese/English dictionary and build a MMS sign application for the Brazilian market, the project manager confirmed that that was possible and that he would like to talk about it.

Talking to the project manager I told him about the latest World Summit Award initiative, namely the World Summit Award mobile media and that he should have entered this application. It turned out that he had entered the application for the contest thanks to the WSA national expert Faouzi. Great work Faouzi. It might be a real candidate for the category mobile inclusion. We will see at the WSA mobile media awards ceremony in Abu Dhabi.