On Friday night a farewell dinner was organised by Media Update. We sat around a fine dinner and looked back over the week. The organisers of the trip, Hans and Jak, were thanked and received Groninger gingerbread as a present. They had brought together a group of interesting Dutch multimedia lecturers. They all are working in multimedia education and come from Groningen (Noorderpoort College and Hanze Hogeschool), Utrecht (Hogeschool Utrecht, CMD) Amsterdam (Hogeschool Amsterdam, Interactive Media) and Grafisch Lyceum Rotterdam. They also mixed with one another. And they also played jokes on one another like the guy offering to get coats for his colleagues from their hotel rooms as he was going upstairs. The next day the colleagues found out that their suits had been exchanged. 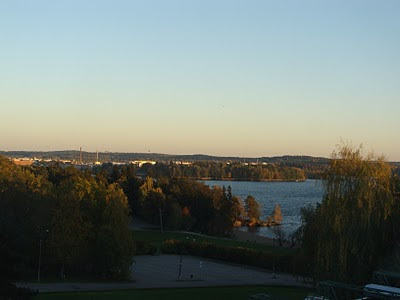 The weather was also beautiful for the whole week. For the lucky ones in the hotel who had a room with a view, they looked over the lake and part of the wood and had a view in the morning like the photograph. The hotel is built against a rock which is overgrown with trees, who were already showing their autumn colours. It was also remarkable that this solicited a lot of walks in the woods by the participants before and after the program. But they also walked to the city to shop for beautiful, but expensive Finnish goods, such as a winter coat and lady’s bags (no photographs shown!). 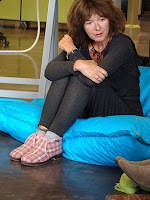 Interesting was the behaviour of some of the young lecturers. They were the whole day busy with their mobiles picking up messages and writing tweets. I had expected to see many iPads like I saw last time in New York, where every other youngster of the WSYA event had such a tablet. But sometimes the lecturers were in a meditative mood.

The program consisted of three parts: two days visits to educational institutes, one day academic lectures and a two conference. An evaluation will have to tell what the general feelings were about these three parts of the trip. But the delegates were also enterprising as they went amongst others to a presentation of Electronic Arts at the other side of town. There they were informed about all the new stuff in games and especially about the Wii and the micro strokes. And one of the lecturers got completely excited by the Galaxy tablet by Samsung. He said: Forget the iPad. The only real drawback was the price of 900+ euro in Finland and 750+ euro in The Netherlands. Some lecturers also went out to visit other schools outside Tampere such as in Turku for contact, students and lecturers exchange. 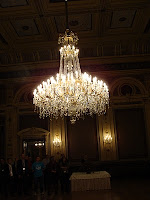 The social agenda wasnot filled but a number of parties were attended. On Wednesday night the Cloud Computing people had drinks together. On Thursday there was a reception at the Old Town hall in the center of Tampere. It is a beautiful old building with a great chandelier in the reception hall. Some of the lecturers extended the invitation of the Electronic Arts people and had a good time at their party.

On Saturday morning most of the group flew back to Holland. Some stayed behind in order to visit Helsinki or have talks with Finnish colleagues. Some went early to Helsinki to look around or do some shopping. Once back in Holland the Amsterdam people were home soon, but the Groninger people had still a long way to go by train.