Today we are off with a group of 16 people in total, people working in education. My business mate Hans Sleurink of Media Update and I have organised this trip with the help of Cai Melakoski, the international contact person of the Tampere University of Applied Science school of Art, Media and Music. We will stay in Tampere for a week.

The flight to Tampere did not go without problems. Hans had problems to reach Schiphol Airport in time as the Dutch railways had an electricity problem. He barely could drop off his luggage in time. One of the delegates had problems with his passport and had to take a later flight. Having arrived in Tampere the luggage of Hans had not come with our flight. So a form had to be filled out. Later that night, though, the luggage was delivered to the hotel by Finnair Airlines.

We booked rooms in the Scandic Hotel Rosendahl, a conference hotel in the middle of the woods and on the border of a big lake. It is great to have a room with a lake view. 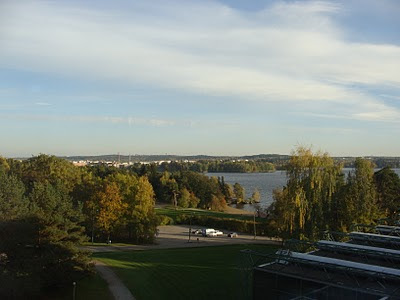 The first two days the group will visit educational institutes, while the last three days the group will attend the multimedia conference Mindtrek. There are a lot of themes in the conference, in fact too much to take in. But it is nice to pick up trends here. In the next days I will report on the visits and the conference lectures and I understand that the instructors of the Noorderpoort College have promised to blog on this trip also.