Recently I talked with a high tech company, where engineers need always manuals. They had started a new complex product in which the engineers have to crawl all over the place. In order to avoid that they have to go back to their manual on screen (they have abolished printed manual already), they were thinking about e-books. It was an interesting talk as no restrictions to the brainstorm session were set.

The second generation e-books such as Rocket book was discussed, but was not really an option as it was too small for technical details. After that the tablet came up from the computer tablets on HP machines to the Nokia tablet. Similar products have been developed by the Dutch research company TNO for construction managers. They were interesting, but would need a strap around the arm in order to carry the tablet along.

The developmenst of digital paper of E-Ink and Philips was also considered. It is an interesting option as it has a low power consumption, the contrast between black and white is clear. Advantage is that it has a clear readable screen even in sunlight, but a problem would be that it has no backlight in dark areas. There was also discussion on the black and white as the manual works with colours; but as Philips will have digital paper with colour in 2007 and the application we talked about has to be introduced by 2008, this would not be a problem. 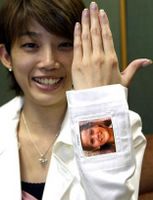 But in the brainstorm we went a step further. Why not have a screen in the clothing of the engineers. So get smart clothing. Research has been done on this already; but the research of a Belgian research company, which portrayed itself as the European MIT Media Lab, was stopped just like the company. But given the time span, the development of their manuals, the development of digital paper with colour, the Wimax facilities and the development of smart clothing, this option should be exercised. The engineers' clothes will not be cheap, but it is an exciting perspective to have the technical manual always with you.

I guess by 2015 we will have clothes with built-in screen for reading the newspaper, magazine and books. Yes print will have been abolished by that time; this projection is just as much worth as the 1995 prediction I made about the end of the printed newspaper in 2005.
Gepost door Jak Boumans op 8:45 AM