On March 1, 2006 Bibop TV will start with SBTV for young people. The youth sites Sugabes and Superdudes will have three hours of live television a day with the internet community shows Totally SB, Do Your Thing and Love Etc. Members of the sites can participate in the shows via their webcam, telephone, SMS and personal computer and exchange ideas and talk about things that keep them busy. The interaction is moderated. The shows are not moderated by a well known television or movie star or a soapie, but by a young production team.

It is 9 months ago that Fred Kappetijn told about an interactive TV service on internet. Now Bibop is starting up. Bibop is a joint venture between Mobillion and Digital Magics Group in Milano. They start up the interactive television show in the Netherlands and will start rolling it out in other European countries. Daily the sites Sugababes and Superdudes are daily visited by 100.000 youths visiting. For the start Bibop TV will serve 12.000 participants concurrently. Upon proven success 24.000 visitors will be served, which compares to target group of a traditional youth television station. Only members will be able to participate in the broadcasts. The show is for free and can viewed by everyone. 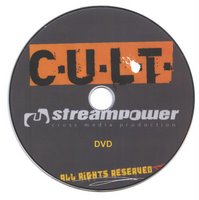 This piece of participatory TV is not new. In Italy Rosso Alicia has been a great success; television and telecom companies have been fighting to partner with the Milanese company. Also in France the program CULT has been a success; moderation was done by a famous television host. My French friend Damien was Senior Producer in the team which thought up the format and did the production; he sent a demonstration DVD (see illustration).

Just heard that "CULT", the TV show, has been nominated for the International Interactive Emmy Awards to be held in Cannes, at MIPTV, in April. Congratulations Damien!