Brabants Dagblad, a group of Dutch newspapers published around Eindhoven, in the home territory of Philips and part of the Wegener newspaper group, has started a research project into the consumers’attitude towards digital newspapers.

It is not the first time that this type of research is being initiated within Wegener. Long before the Brabants Dagblad joined Wegener, the newspaper conglomerate had a research department WISE. In 1995 an intern Beate Crombags produced a study into the opportunities for newspapers in a digital world. (I guess that there is no copy of her thesis anymore in the desks of the board members as most of them have moved. In case, I still have a copy in my archive.) 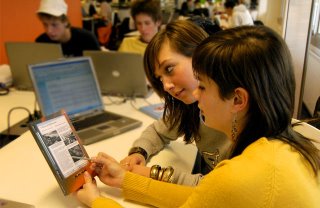 But this time the research was not directed at the opportunities for the publisher, but is end-user centered. The research is being executed by the company Altuition, Philips Research and the High Tech Campus in the framework of the research project Co Creation Lab. Selected people are invited to the Philips HomeLab, a futuristic home created by Philips to show and test potential new equipment and ambient applications. Amongst others the people were offered the iLead of iRex Technologies and could play with it. They were also offered other equipment ranging from PCs to TVs, mobiles and PDAs and of course the printed paper. Wegener hopes in this way to get an insight into new technologies and preferred information carriers. 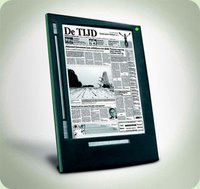 It will take another ten years before printed newspapers will be replaced by electronic editions, says Henk van der Zee, managing director of Brabants Dagblad. (In 1995 I wrote an article saying that the printed edition would be replaced by an electronic edition by 2005). He has been monitoring the behaviour of the guinea pigs in a homely environment, while consuming the news.