A wonderful world of screens (2)

Besides the two presentations on big screens, four presentations were given on in-store use of screens. These presentations got closer to the term of narrow-casting, I guess. I will deal with two of the presentations today and the other two tomorrow and close off with some observations in the fourth instalment.

Sony and Heineken have set up the company ON. Presently they have 20 venues kitted out with beamers, screens, internet connections. By the end of the year the company wants to have 500 high-end clubs and discos fitted out with their gear. The ambition of ON is high (of course with aiming at high-end clubs, whatever they are). The in-club screens must present an experience. Up to now the experience is with arty video material and short movies such as BMW’s Event World. ON is also working on interactivity by SMS. In a spot they show how a young man types in his name on a mobile and sees his name projected on the bums of a charming lady (talking about high end). The interesting part of the concept is that you do not see 30 to 60 second spots of advertisement, but arty video material and movies which can create an ambience. The concept offers an excellent chance for digital storytelling for the time the broadcast way (without interruption of the customer, please), but in the near future interactively with mobile and PDA. 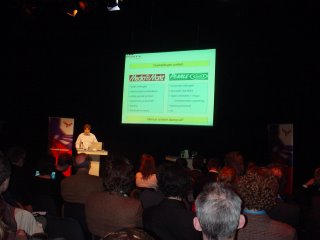 POSTV is active in another segment of the market. I guess that they are the market pioneers. They first had a television program Wannahaves in which they promoted products and services. But they found out that every time they were looking for an audience and could not guarantee the advertiser a specific audience. That’s why they changed from television to narrow-casting, giving the advertiser the media dividend of the visitor (reach, contact and quality of content). Two cases were presented: one of computer/white goods store Media Markt and of the specs company Pearle. The comparison basically showed that the screens are used to improve sales, explain products and shorten the waiting time. And of course staff can be trained during off hours about new products and attitudes. All this screen content is pumped in by broadband connection. The example of the Canon EOS camera campaign last year was dubious. In the months of April, May and June last year there was an advertisement campaign in the newspapers and on TV. In April there were some 1000 sales, in May this rose to some 5000, but came June with advertisements in the newspapers, on TV and on the ins-store screens the sales had gone up to 12.000 units. In the graph shown, more than 50 percent was due to the in-store screen. These statistics were not convincing as they sounded like sales talk with a linear projection into heaven.

Sitting back and reviewing these examples of narrow-casting one still can wonder about the definition. It is targeted advertising on in-store screens intended to hit small groups of customers. The shop is the narrow conduit in which the buyer and non buyer are selected out.