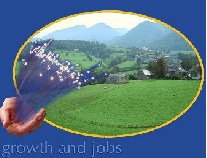 The European Commission mobilises all its policy instruments to bridge the broadband gap. The Commission considers wide broadband coverage in Europe as crucial for fostering growth and jobs in Europe. This is why EU telecoms legislation, structural and rural policy instruments need to be mobilised in full respect of state aid rules in a joint drive to bring high-speed “broadband” internet access to all Europeans, in particular to the EU’s less-developed areas. This is the conclusion of “Bridging the Broadband Gap”, a European Commission Communication presented yesterday jointly by the European Commissioners for Information Society and Media, Competition, Regional Policy and Agriculture and Rural Development.

“Broadband internet connections are a prerequisite for e-business, growth and jobs throughout the economy. Competition and open markets are certainly the best drivers of broadband in the EU”, said Viviane Reding, Commissioner for Information Society and Media. “However, broadband connections must not be limited to the big cities. If the EU and its 25 Member States make a clever use of all policy instruments, broadband for all Europeans is certainly not out of reach by 2010. But the time to act is now.”

Competition Commissioner Neelie Kroes underlined the importance of EU state aid rules in this respect: “Deployment of broadband may be hampered by market failures in rural and remote areas. In such cases, well-targeted state aid may therefore be appropriate, e.g. in the form of public private partnerships to support the construction of open networks. But we have to make sure that state aid does not crowd out private initiative, nor distort competition to an extent contrary to the common interest.”

Mariann Fischer Boel, Commissioner for Agriculture and Rural Development, stressed: “Thanks to our new Rural Development policy, money is now being increasingly focused on creating new business opportunities in the countryside. There is a particularly strong concentration on broadband and information and communication technologies, where we already finance projects under our LEADER initiative – from the north of Scotland to the south of Spain. We now want to put them into the mainstream of our Rural Development programmes. The Rural Development fund is worth €70 billion between 2007-2013, with national funding on top. I urge Member States to tap the potential of broadband in their national Rural Development strategies.”

Rapid progress in broadband take-up across Europe in the past three years can largely be ascribed to a combination of competing infrastructures and effective telecoms regulation. The broadband penetration rate at the end of 2005 is estimated at 13% of population or about 25% of households, reaching almost 60 million lines throughout the EU. Despite fast growth, broadband has yet to reach some of the EU’s less-developed areas because of low and uncertain returns on investment. In 2005, broadband was available to about 60% of businesses and households in the remote and rural areas of the EU15, and to more than 90% in the urban areas, but the gap is greater in the new Member States. Broadband speeds are often lower in the countryside too, which makes it difficult to carry the large volumes of data needed for e-business, e-government, e-health and multimedia content applications. Rural broadband speeds average less than 512 kbps, whereas urban ones are rising and now often exceed 1 MBps, permitting the use of rich services.

To accelerate the roll-out of advanced broadband communications in Europe, the Commission today proposes two main strands of action:
- strengthening national broadband strategies, which should set clear targets and reflect regional needs, including a strategic approach to making use of EU and national funding in less-developed or rural areas;
- stepping up the exchange of best practices, in particular by the setting up of a website that will act as a single meeting point for local authorities and industry players to exchange information and gather experience. The Commission will also hold a large “Broadband for all” conference at the start of 2007 to showcase the benefits of broadband services to the rural communities.

Wanadoo and @home have joined Planet Internet by becoming the second and third ISP to pass the 500,000 broadband subscriber mark, ending the year with 505,000 and 531,000 user respectively. Planet Internet grew by 72,000 subscriptions in Q4, as much as the total net subscriptions during the first nine months of 2005, ending the year with 577,000 customers. KPN's share of the Dutch broadband market has increased to more than 35 percent. The aforementioned ADSL ISPs plus acquisitions caused the number of KPN ADSL customers to grow to 1.47 million in 2005. Telecompaper estimates that the Dutch broadband market will continue to grow driven by increasing demand for VoIP and IPTV services, and will reach the 4.5 million customer mark during the second quarter of 2006.