Off to the Top talent Award

Today is my 300th edition of the Buziaulane blog. It started on May 1, 2006 and has been published daily. However, from March 2nd till March 5th, 2006, I will be at the Top Talent Festival in Vienna, where I hope to report from the floor on the nominees and winners and on the VociNet workshop on Content on different platforms as well as the Inscape workshop on digital storytelling. The award ceremony on Saturday night will be streamed, so if you can not be present, join the award ceremony remotely. Here is my first report: 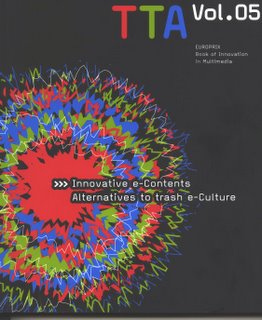 The festival started with a welcome package in the hotel room and a welcome party. The welcome package contains amongst others survival material for Vienn, but most teasured is the annual catalogue and DVD (the catalogue and DVD can be ordered from ICNM). The welcome party is at the Top Kino in the Rahlgasse, which is a trendy establishment, according to one of the hotel receptionists. When we arrived there were already a lot of Top Talent Teams presents as well Top Talent Professors and participants in the VociNet workshop.

The welcome party is the start of an impressive weekend for the young top talent teams. They get invited to the festival, trip and hotel for three nights paid for two members of the team. Also the professors and lecturers are invited and have received the honorary title Top talent Professor for the first time this year.

Twenty two teams have been invited; sometimes they come with more than they paid team members, but that does not matter. Roughly 100 people are involved for the long weekend. The party is a first get acquainted party. Where do you come from, what team are you in. There is a lot of information to exchange. The teams will hardly realise what winning the Europrix Top Talent Award will do to them. But they will hear the story of Adam Montandon and his team, who won the EUROPRIX TTA for Content Tools and Interface Design last year. He design for a colour blind man a system so that he could hear colours. It is a pity that the teams can not hear the story of Damien Marchi of Streampower, one of the Europrix jurors (in the student jury and one professional jury) who is up for the EMMY award this year at the MIPTV with the interactive show CULT.

At the party are also the VociNet workshop delegates. They are part of the EADiM Academic Network, formerly called the Instructors’ Network. These people are all working and teaching as professionals in universities and junior colleges in the field of multimedia. The network was started three years ago and has had some success already with workshops. The VociNet stream of workshops have been sponsored by the EU Media programme. Theone being held in Vienna is the third one in the series on Content for different platforms. The two other workshops were held in Salzburg (Digital Storytelling) and Tampere (Project Management and Design).

It was good to see the people of ICNM again, who organise this festival. Rainer Steindler and Fleur Weber are the account managers for this festival. Also Birgit Berger, the business manager of ICNM, was there. As usual, the auctor intellectualis of this festival, Professor Dr. Peter Aurelius Bruck arrived late at night, having attended some meetings.