Piping internet to the TV tube (1)

On Wednesday the Hilversum incubator iMMovator held a meeting on internet on the tube. Of course the meeting was held in a perfect spot in the heart of broadcast city NL. On the program a small exhibition and some eight presentations.

The happening reminded me of the early days of internet, when in 1995 the personal video recorder TIVO came around. Everything was going to change. Philips bought the license to TIVIO for Europe, but the company has never done anything substantial with it, as far as I can see. Besides the TIVO also the relationship between television and internet was explored. Bill Gates had already pointed towards the question of TV or internet as well as TV and internet. And consultancy companies speculated freely. So also a consultancy bought by the Wegener newspaper company, managed by Jan Jacobs. But by 1996 the speculation was all over and the broadcast world quietly set in on cross-media policy (of course the term was unknown at that time). But now, more than ten years late we are discussing piping internet to the tube.

Before the meeting there was time to look around at the small exhibition of boxes: the Lamabox, the P2Pod, PCzapper, Byton and Sitecom. I saw a lot of boxes and screens. The boxes differed, some screens looked similar. What astonished me was the un-professional touch of the small exhibition. There were hardly fact sheets and data leaflets. No canvas banners telling what brand of box and what functionality. Even a company like Alcatel came in with a portable PC, a beamer and a professional screen (I must grant). No banners and no leaflets; you just had to guess the company. Later on I understood that the research department of Alcatel was demonstrating and not the marketing department. 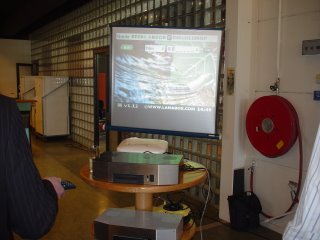 Of course the Lamabox drew lots of attention. These guys from the Dutch egg capital Barneveld have developed a box with a peer-to-peer system, which can pick up a lot of TV stations, movies, and radio stations. They started developing their box last years. They have the box in production now, but have problems upscaling to the demand and still have to deliver many a box. Typically a start-up company taken by success.

All in all, the small exhibition looked like a boot sale. Of course, this level indicated that internet on television is still in the beginning phase and is being handled by whiz kids and amateurs (in the good sense). The small exhibition signaled to me that professionalisation in this sector still has to start. So forewarned I went to listen to the lectures.