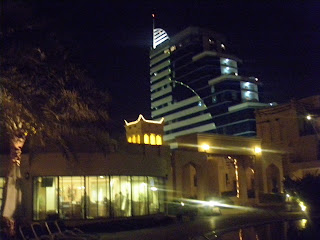 It looked like the start of a romantic holiday, when I arrived in the Novotel Al Dana Resort in Manama (Bahrain) last Friday. The place built in the traditional style of Bahrain and its outlined stressed by Xmas light strings. And the next morning, by daylight, it was still an attractive holiday resort.

Yet, I had not been invited for a holiday by the Bahraini. The Bahrain Internet Society had planned the Bahrain eContent Award (Bea) and wanted two external observers to assist the jury process. Also my Indian friend Osama Manzar had been invited. And it was great to see him again. We have known each other since the WSA 2003 Grand Jury in Dubai. He recently organised an eContent summit in New Dehli together with the annual Mathan eAward, which has now expanded to eight countries in South Asia (Afghanistan, Bangladesh, Nepal, Pakistan, Sri Lanka, Bhutan, Maladives, India). I was surprised to see that he even received even submission from Afghanistan, called Sea Monkey, a font developed in the local Pashto language. This is an indication, the catalogue says, that as the English language is not popular, there is an urgent need to spread computer literacy and the local Pashto language as a chosen language vehicle to spread ICT and digital in the country even in remote areas. 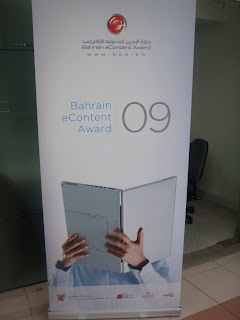 The jury deliberations went off well. The organisers had selected a group of 11 jurors, who slaved over 396 entries. I am always astonished at the large number of submission. Whenever a multimedia contest is held in the Netherlands you might be happy to receive more than 100 entries. But I guess the Dutch are more hesitant to submit a multimedia entry. Of those 296 entries most are in the categories e-Government, e-Business and the new category e-Banking (Bahrain is one of the financial centres in the Middle East). These favourite categories are followed by e-Learning; not surprising as the countries in the Middle East, faced with the prospect of exhaustion of the oil wells, are putting their cards on education and the development of knowledge. 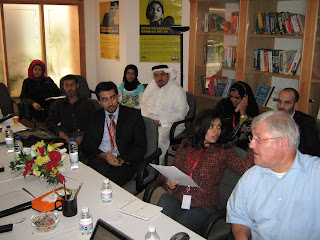 By late afternoon of January 12, there was white smoke and the jury had delivered its final list after a day of hefty, but intelligent debate. It was great to hear the jury members argue with each other. Osama was managing the process together with Nawal and Ahmed and they nicely kept it in hand, so that by 18h there was a definitive list of 21 winners and 8 special mentions. The jury process was finished with an official dinner attended by the jury staff, the jurors and the conveyors, people from the Bahrain e-Government Agency, and the Bahrain Internet Society.