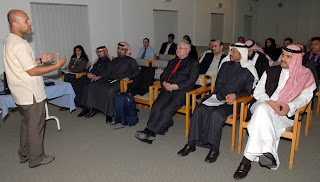 I am back in the Netherlands now for some days since my trip to Bahrain. Being taken up by amongst others the Dutch Nominations for the World Summit Award, Bahrain looks far away. Yet after the jury deliberations, Osama and I still had an obligation to fulfill. Besides being observers of the jury process, the organisers requested two presentations for the members of the Bahrain Internet Society (BIS) from Osama and me. Osama was the first speaker as he had to leave for New Dehli earlier than I had to leave for Amsterdam (1h05). Osama spoke on internet governance, while I addressed the development of content since the beginning of internet.

Osama started with a describing the focus of e-governance. He described two views. The narrow view focuses only on the management of the Internet’s core resources (e.g. IP addresses, domain names, the root zone) which needed special governance arrangements, and in which contracts are the principal governance mechanism. However the broad view includes its social, economic, cultural and political impacts in addition to its technical and logical infrastructure, and envisaged the use of a correspondingly wider range of governance mechanisms, including treaty instruments. In his view the focus on Internet Governance must include both views. He drew consequences from his view and proposed that internet governance in the digital divide should not only keep itself busy with technology and standards, but also with the consequences for the digital divide such as content availability online and offline to facilitate internet enabled governance delivery as well as derive maximum benefit out of the Internet as a prime governance and service delivery platform, content creation in the local language, ways to protect intellectual property rights and free flow of information. In the rest of his speech he tested the views against the practices in the Gulf area and South East Asia and noticed that the Gulf area is opening up to the broader view of e-governance. In 2002 the Arab world was still in the lower ranges of the digital gap in the world; but now the area is vast improving.

Osama concluded that the necessity for learning and sharing each other’s experience between Arab countries and Asian countries is timely. There is a need to develop greater communications and information channels as well as developing inter-governmental and inter-institutional charters. Expertise should be shared in technical infrastructure and projects. There should be mutual support in training and teaching activities. And a joint research system should be set up.