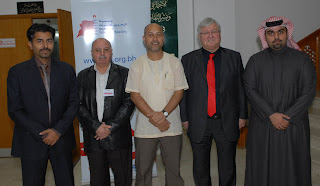 The speakers together with boardmembers of the Bahrain Internet Society (BIS).

After the lecture by Osama, it was my turn. I took a long, hard view on e-content, starting with the definition developed by Andrea Buchholz and Zerfass in the book e-Content . E-Content · Technologies and Perspectives for the European Market (Springer, 2004):
E-Content is digital information delivered over network- based electronic devices, i.e. symbols that can be utilised and interpreted by human actors during communication processes, which allow them to share visions and influence each other’s knowledge, attitudes or behaviour. E-Content allows for user involvement and may change dynamically according to the user’s behaviour.
It is a subcategory both of digital and electronic content, marked by the involvement of a network, which leads to a constant renewal of content (contrary to the fixed set of content stored on a carrier such as a CD-ROM, or the content broad-cast via TV and Radio). This constant renewal of content in tie with its dynamic change allows for a qualitative difference, thus making it E-Content.

I strolled with the audience through the web content developments, starting with the electronic brochure era. It was the time that we all got excited with push technology, until we were sick of all tickertape-like information. Once we had enough experience with internet, we started to look for combinations with other media; the cross-media era with Big Brother was an example of cross-media. The cross-media wave was followed by Web 2.0, wook Social Mediahich turned out to be a container term for a collection of technologies. Now social media is the latest trend.

According to a definition in the book their Social Media by Katri Lietsala and Esa Sirkkunen, social media is a term that is used to describe web services that receive most of the content from their users or aggregate the content from other sites as feeds. The sites build on social networks and on the creativity of the participants of one or more communities. Social media have some typical examples with Wikipedia, blogs, YouTube, Facebook, del.icio.us, Digg.com, LinkedIn and Flickr. They are categorized in genres: content creation and publishing, content sharing, social network sites, collaborative productions, virtual worlds and add-ons.