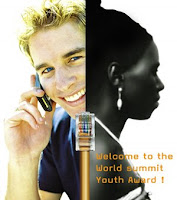 Everybody under 30 can participate in this contest with five categories:

1. Fight Poverty, Hunger and Disease! Rewards the most effective contents and applications addressing issues of extreme poverty and hunger, offers solutions for those whose income is less than $ 1 a day, supports the reduction of diseases and fights the spread of HIV/AIDS and the incidents of malaria.

2. Education for all! Gives credit to the most innovative contents, platforms and solutions to give children everywhere, boys and girls alike, a full course of primary schooling, to advance in training for personal development and jobs, and to achieve a high level of understanding and knowledge of the global information society and its problems and promises, challenges and opportunities.

3. Power 2 Women! Demonstrates the most inspiring contents and communities which promote gender equality and empower women, eliminate gender disparity in education and at work places, facilitate access of women to all levels of political decision making and that strengthen women's contribution to peaceful resolution of conflicts.

5. Go Green! Showcases the ground-breaking applications and contents addressing the natural environment, ensuring sustainability, integrating the principles of sustainable development into country policies and programmes, reversing the loss of environmental resources including biodiversity, reducing the proportion of people without sustainable access to safe drinking water and improving the lives of slum dwellers.

Three winners in each category will be given the opportunity to showcase their platform to heads of state, business leaders and civil society at the World Summit Award (WSA) Gala and Winners Conference in June, 2009 in Monterrey, Mexico.

The WSYA will be organized 2008 to 2009 as a follow up activity of the World Summit on Information Society and its action plan towards the year 2015. The Youth Award is organized by the World Summit Award Network for the second time after 2005. The 2008/09 contest is organized in partnership with the Cyber Peace Initiative (CPI) launched by the Suzanne Mubarak Women's International Peace Movement in 2007. The CPI has a mission to empower youth of any nation, through ICT, to become catalysts of change, to create safe and better futures for themselves and others, to address the root causes of conflict, to disseminate the culture of peace and to create international dialogues for a harmonious world. Founding partners of CPI are The Suzanne Mubarak Women's International Peace Movement, the Ministry of Communications and Information Technology of the Arab Republic of Egypt, the International Telecommunication Union, the Global Alliance for ICT and Development, Microsoft, Cisco and Intel. WSYA is also supported by the Internet Society (ISOC).

Get involved today at http://www.youthaward.org/ and showcase your project to the world!