BPN 1379 Yet another iRex e-Reader; when comes the marketing strategy 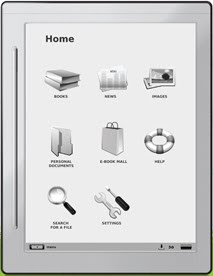 Irex was the first commercial developer, who launched a digital paper reader in 2006, first for Sony and later on with its own product, the iLiad. But despite the excellent product, iRex has missed the commercial wave, which has been caught by Amazon and Sony, partly because of the high prices of the devices and its marketing (by technicians).

Now iRex launches yet another e-Reader, the IREX DR800SG, a slim, touch-screen eReader that offers multi-mode 3G wireless capabilities. The new device with a screen of 8.1 inch (diagonal) follows the line of the iLiad version Versatile and its eunuch version Bookwurm. iRex Technologies has also the iRex 1000 series with a screen of 10.2 inch (diagonal), which has two versions on the market and a third version promised. The DR800SG will be the fifth e-Reader model of iRex in the market.
Competitionwise, Amazon and Sony are far ahead of iRex in the USA. According to estimates there are 4 million e-Readers in the USA, of which Amazon and runner up Sony have the lion share. This is mainly due to the way they modelled their marketing strategy according to the iPOD syndrome, which consists of five elements: hardware; price, portfolio of books, format, download service, innovative image as promotor (Apple, Sony, Amazon).

Despite the hefty price tag of 399 US dollar, Barnes & Noble, consumer electronics chain Best Buy and telecom operator Verizon will attempt to help iRex into a comfortable seat. Barnes & Noble is a bookshop chain, which had an e-Book shop in 2003 and closed it, but re-opens now with 750.000 titles. Best Buy is a consumer electronics chain, which is not the most ideal environment for selling e-Readers and books. Verizon has been the partner of iRex for a long time.

The new e-reader will not be available in Europe for the time being. Later on in the year iRex will make its plans known for the European market.
Gepost door Jak Boumans op 3:52 PM