From Utrecht to Almere

Electronic Media Reporting (EMR) has moved from July 21, 2006. The company moved from the historic city of Utrecht to the fastest growing new town in the Netherlands, Almere.It has been a hard time lately keeping up the blog, but also taking decisions. For now there was an opportunity to chance telecom, cable and internetproviders. So we shopped around. But there was also the opportunity to start using the latest technology such as triple play and wireless telecom. It took a while to have it sorted out and of course it took a while to get everything installed. It meant of course saying goodbye to some providers. In this mini-series I will tell about the selection we made and why. I will also look at the issue of self-help services on internet.

EMR is a soho company, working from an office at home. As the house was in Utrecht when we started up the pap-and-mom company in 1990, we established the office at the Johan Buziaulaan in the residential area Rijnsweerd of the historic city of Utrecht.
By last year the time had come to move to a smaller apartment for various personal reasons. The big house of some 200 square metres with an unused floor had to be cleared from 28 years stored history of paper and digital artifacts in order to fit into a smaller apartment. 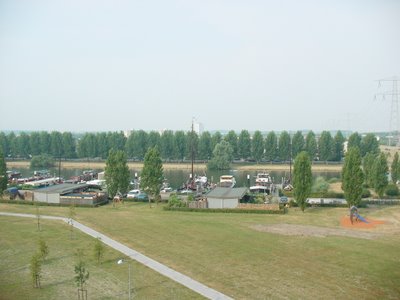 As there is no emotional bond with the city of Utrecht, we decided to choose for family ties and to move to the new town of Almere. This new town officially founded in 1976 in order to alleviate the housing shortage of Amsterdam. It has grown fast and offers now almost 70.000 houses to 178.458 people (stats January 2006). In the coming years the new town might become the twin city of Amsterdam. It belongs to the Northern wing of the creative industry of the Netherlands. There is a television studio. It has a lot of software companies in its borders. And not to forget a department of Information engineering.

In the coming days I will tell you about changing providers and selfhelp services.