Of e-books and digital paper (9)

The Sony readers became lighter and got colour screens, but this embodied electronic book did not catch the fancy of the readers’ audience in the USA and Europe in the beginning of 1990. By the end of 1995 it was clear that people would not buy an e-Book reader and e-Book titles. For many national e-book committee members the meeting of the International e-Book Committee, the supporting organisation for Sony, was the last one.

But by 1997 the second of e-Book wave came up. Internet had made impact and was seen, amongst other application, as a distribution network for text files. Project Gutenberg was no longer production oriented, but the e-texts could be distributed easily. This new distribution opportunity through Internet created a new business model. No longer was the movement hardware driven by a consumer electronics manufacturer, but driven by the whole professional chain from publisher to producer, from producer to distributor. Publishers license the electronic editions to a production company; the production company licensed distributors such as bookshops or started to distribute the e-books themselves. 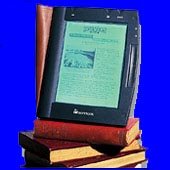 The e-books were sold through Internet for reading on a desktop PC, a portable personal digital assistant or a portable dedicated reader (see photograph). These readers were small tablets, the size of a pocketbook. The monochrome LCD screen was a touch screen with a stylus.

Even another business model sprang up: the author becoming the publisher. The most clear example of this should have been Stephan King. In order to prove the paradigm, he started to publish the electronic book Riding the Bullet without a printed version in the shop. His publisher Simon & Schuster had asked the companies Glassbook and Softlock.com had developed an e-commerce sales system with which copies of PDF could sold for a few dollar. On the introduction day the digital file was already available for free as the sales system had been hacked. Later on in 2000 he went further and offered the serial novel The Plant for which readers were asked, not forced to pay 1 US dollar. King had threatened that he would stop after three instalments if the percentage of those paying the $1 fee for each section dropped below 75 percent. The fourth part of the serial novel costed $2 instead of $1, but at 54 pages it will be twice as long as the previous instalments. Eventually the cost for the entire book would be capped at 13 US dollars. The serial e-book method did not find any following among authors.

This second wave got itself in some problems as to the format. There were proprietary software files like PDF, but also other ones. Exchanging e-books between PC, PDA and an e-Book reader was not always possible. In practice it also meant that production had always to be done in more than one format. So production costs were higher, while the target groups were segmented.

The dedicated e-Books did not really make inroads. E-Books on PCs and on PDAs like Palms still exist. But the market is already nascent for years.