Of e-books and digital paper (2)

I have a publishing background, having worked for VNU and Kluwer, before it became Wolters Kluwer. I worked for 10 years in reference departments, producing general encyclopaedias. My first and greatest love was the Great Spectrum Encyclopaedia, a real contemporary encyclopaedia with beautiful break-outs and other design. Besides it was the first Dutch general encyclopaedia to be produced with a (mini-)computer, a PDP Digital. When I moved on to Kluwer I got a chance to change the production process and create a database with general mark-up language for spin-offs.

Confronted with the new technology, I got fascinated with the new opportunities and started to think about electronic books. Mind you, it was in the time that PCs were still in the laboratory and hardly known in the Netherlands. I still remember that I was asked to speak on the developments of database publishing in 1978 and I drew a computer with chips, representing the volumes of a general encyclopaedia. Can you imagine now: taking out a chip in order to get a linked article in the last chip? 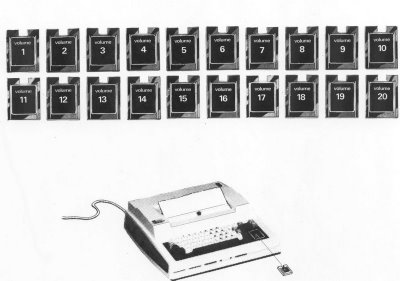 Little did I know of the eBook developments going on in the States with Michael Hart of the Gutenberg project and my compatriot Mr Andries van Dam at Brown University in the States. By 1980 I got a glimpse of the electronic books, when VNU brought its Academic American Encyclopaedia, the later Grolier Encyclopaedia, online and put it simultaneously on a laser disc, a large precursor of the CD-ROM.

But in 1990 there came a change in the concept of electronic books. No longer consisted the electronic book of just an electronic file which could be brought online or stored on a general purpose CD-ROM player. Pursuing the success of the Data Discman, Sony produced a mini CD-ROM as Electronic Book, which could be played on a single purpose electronic book reader. A dedicated player made its entrance. But the EBook of Sony was not a success in the US and Europe; by 1995 it was dead. Yet in Japan the e-Book continued even up to now.

With internet spreading, a second wave of eBooks came about. The electronic books were distributed online to be loaded on dedicated readers. But again e-Books did not take off for a lot of reasons. A predicted third wave with telecom and personal digital assistant devices never really occurred.

But now in 2006 the e-book might come back with a vengeance. Readability has greatly been improved with digital paper, which has a white background and can handle 12 greytones. Telecom facilities including wi-fi and Bluetooth have been incorporated opening opportunities for reception of digital newspapers.

After three technology based waves, there is a new start. In the coming days I will trace the developments of eBooks and digital paper in more detail. Any comments and additions are welcome.