Of e-books and digital paper (4) 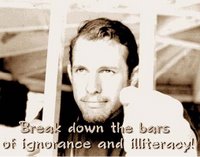 Three days ago it was 35 years back in history that Michael Hart, a student at the University of Illinois, started to type the United States Declaration of Independence in ASCII and in capitals.

That was the start of e-books. It was remarkable as the focus of computer use at that time tended to be on (administrative) data processing. But Hart realised that computers were part of a network and could distribute information such as electronic books. It took him two days to type the Declaration of Independence on a teletype machine.

It was also the start of the Project Gutenberg, named after the German Gutenberg printing machine. The development of the Gutenberg press meant a revolution in information history as books became cheaper compared to the handwritten manuscripts and incunabilae. Using computer technology Hart wanted to make electronic books freely available. Of each book a plain text file should be available so that it could be displayed on virtually any computer.

Project Gutenberg started a volunteer movement of producing e-texts by re-typing and later by scanning. By 1987 there were 313 books available. The introduction of internet gave an impulse to Project Gutenberg worldwide. By now there are five official Gutenberg sites: main site , the Project Gutenberg Consortia Centre , the Australian centre, the German site , the European site . There are also local projects like in the Netherlands the Project Laurens Coster , the supposed Dutch inventor of the printing press, and the Swedish project Runeberg. The Project Gutenberg has become a major volunteer organisation claiming to have produced some 100.000 electronic books today, in more than 100 languages and in various formats (ASCII, HTML, PDF).

Micheal Hart hopes to reach the 1 million e-texts milestone by 2015. But, given the scanning technologies and the volunteer power looks like this milestone will be reached by 2009. Project Gutenberg is a project directed at the production of e-books or better with e-texts, electronic files of books texts and illustrations. They will all be made freely available and will be distributed offline (on a DVD for example) or through Internet. The e-texts are future proof for machine translation, but also for conversion to audio and Braille.

For the Project Gutenberg to produce e-books the texts need to be copyright free. In this way the collection will basically be limited to books from before 1930. There are also copyrighted e-books for which authors have given permission.