Of e-books and digital paper (8)

The closest embodiment of an electronic book

Up to 1990 electronic books were not taken commercially serious, except for expanded books from Voyager. But Voyager had a distribution problem as they had some representation in the States, but no representation in Europe. 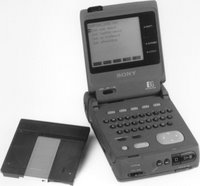 In 1991 Sony hijacked the term Electronic Book for an electronic publishing project. On the back of the success of the Discman (photograph; collection Jak Boumans) a similar very portable device was developed, but now for multimedia data. It was dubbed the Data Discman, while the minidiscs, which could contain 200 Mb were named Electronic Books. Over a period of time the Data Discman moved from a black and white display for text and illustration to a portable device with a colour display and audio output.

From the start the reader was a small piece of hardware, weighing 450 grams. It consisted of a black/white screen with backlight. It would run on batteries and electricity. The minidisk would hold 200Mb of data (text, illustrations, photographs and sound discs). The authoring tool was proprietary software; a producer had to sign the license if he wanted to produce a minidisk.

Sony had thought about the distribution. As with its other products it rolled out the EB geographically: first in Japan, then the USA and after that in Europe, the Middle East and Asia. But the company had also a producers’ participation plan. It would ask a company to set up a committee, bring some publishers and production companies together into a national committee, provide them with a temporary license to the software and contribute to some fascinating titles financially. It was a fast way of getting publishers and producers involved in the project. Soon there was an international network of national committees under the leadership of the Japanese committee. 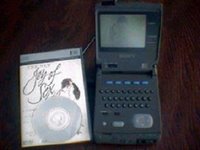 Commercially the product was difficult to sell. It was a new concept. Besides, a potential buyer would have to shell out roughly 600 euro (US dollar) for a player. The mini-disc would cost more than a music CD in a record shops. But with PR and various campaigns, EB did catch the attention of the audience. Publishers premiered their new books as e-Book edition as was the case with the book Sliver. However, the American and European market had no need for it; a bestseller as a printed book the title Joy of Sex hardly sold as and e-Book title. In total some 350 titles were produced in the USA and Europe. In Japan the device continued to live, mainly as a dictionary aid.

Sony's Electronic Book in combination with the Data Discman was the closest embodiment of an electronic book. The reading device was smaller than the typewriter Vannevar Bush envisioned; in fact it has become extremely portable with a weight rather in grams than in kilograms. A complete encyclopedia could be stored on a small disc of 200Mb, including sound, graphics and stills. And it could be consulted at extreme speed and with a lot of flexibility. Also the requirements formulated by Van Dam have been met. Non-linear structures and interactive illustration and even audio became part and parcel of the product. Yet, Electronic Book was no commercial success; the consumers did not buy the concept.