For today I had some appointments. The first one was with the National Records and Archives Authority. I met two of the young employees of this office and they told me about their venture, which had recently been started after a decree by the Sultan. Just like in other Arab countries there are not many records in government or in private hands. There is in fact no archival history. Archives in the Western world are a different game: the church kept the records of birth marriage and dying and since Napoleon an archival tradition has been instituted.

Now Oman is starting archiving its national documents. And they really have to start from the beginning. Two years ago they started and agency and pulled employees from various government departments. They also started courses for students and have now the first wave of 75 graduates and a second wave of 50 students in the benches. They will be commissioned in government ministries and agencies and start collecting the archives to be. But having said that a system for the workflow and a database system still have to be selected. And that is more difficult than thought. For not all documents are already digital, so they will have to OCR’ed. But OCR’ing Arab documents is not easy, certainly not when they have been written by hand and even if they have been typed or printed. Instead of promillages of mistakes, they talk in percentages. Yet the start is there.

Oman is probably after Tunisia the second or the third country dealing with archives. The effort is to be applauded. However I think that the archive world in the Western hemisphere should assist these countries with training and methods. So far the Arab world is fixed on Tunisia, which has a special training in this field. However the Western countries should also give them assistance and exchange knowledge. I was impressed by the agency and its set-up and certainly by the young office manager of 32 years and his colleague, who are working on it. 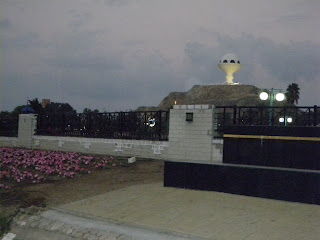 I was taken around by one of them as I had some time at hand. So before my next appointment I was taken to the diplomatic area. I saw the large embassies of the US, UK and India. I saw also some of ministries such as the ministry of religion (no longer the ministry of Islamic religion). I saw also the Opera under construction, not exactly a building that comes to your mind in this context. It was almost coincidental, that the National archives employee played classical music on the auto radio; he had inherited the love for this music from an old friend.

After some talks at ITA, I collected my luggage at the Wifi unfriendly Golden Tulip hotel, but they bought me to the airport. At last I could leave the lounge, the Christmas songs (Hark the herald angels singing.., Jinglebell, Jingelbell etc) and the Christmas tree with Father Christmas and the sheep in the snow. It was 27 degrees outside, green grass and beautiful azalea flowers. Off to Dubai.