Yesterday I had lunch with Erwin van Lun. It was the last business obligation of this year and a very pleasant one. Erwin is a consultant on strategic brands; he has written a book about brands in a changing media context and he is a speaker. Erwin (1968) studied artificial intelligence at Delft Technical University and worked for more than 10 years in the ICT company LogicaCMG, first as consultant and later as e-communications manager. After this job he became strategic planner at Ogilvy in Amsterdam. In 2006 he was conferred the degree Master of Brand Management by the Erasmus University in Rotterdam. 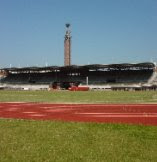 We have met only one time, but we have had e-mail contacts several times. Now we were lunching in a retaurant in the historic Olympic Stadium in Amsterdam; the stadium was built for the Olympic Games of 1928 (see photograph). Erwin is active in brand management in The Netherlands, but he will also become active in Australia at the beginning of next year. My Australian WSA friend Louise has helped him in researching the Australian interactive marketing situation.

In his book he presents a vision on brands of 2015 and later. He presupposes a stable society without terrorists’ attack, climate disasters or human epidemics (he does not mention an economic crisis). He limits the scope of the book to the Dutch marketing, media, brand, design and communication world and the Dutch consumers. In the preface he notes that the book will be the first Dutch book with Dutch examples and not with the classic cases of Virgin, Starbucks and The Body Shop.

In the mass communication era brands were needed. The personal bond between the manufacturer and consumer changed due to the remote manufacturing. Mass communication technology through television and radio had a lot of advantages and some teething problems. It was all one way traffic and there was a limited time window in which the message could be delivered to the consumer. Brands consisted of simple, repeating messages. In this media context brands remained almost to simple.

But the media context is now coming of age. The flaws of mass communication disappear. In the future technology brand will not only send out a message, but the senders will have to listen and understand the signs of the time and recipients. Brands should built relationships, should be able to really help (not just pretend) and act like friends should do. Consumers love to communicate with intelligent brands and will make space for them. Brands will grow up beyond puberty and mature.

In the train on the way back I was so engrossed in the book that I missed my stop!