I have arrived home safe and sound after my trip to the Middle-East, specifically to Oman and Dubai. It was the first time that I was in Oman and I hope it is not the last time. I enjoyed the people and their hospitality. I went for the second time to Dubai and enjoyed the company of the people of the Knowledge and Human Development Agency. They are exploring interesting ways for the future. I am astonished at the rate which with Dubai is changing. As a cab driver said: As soon a road has been completed, it will be registered in the GPS system; however do not be surprised that the road has already been replaced by a new one.

Of course the present credit crisis might become a problem for the country. A lot of construction works are still going on like the highest building of the world. But the crisis is beginning to bite for the emerati. Gold sales are down with 80 percent, while petrol sales are down with 30 percent. Even 300 emerati did not meet their deposits for the home or office projects around Dubai. Yet the emirs of Dubai will not have problems for the time being as they have not really invested in the big projects like Palm island and the World island. As soon as these projects were announced investors were encouraged to put money in the projects. The government itself did not invest; so they will not loose money. They still have the revenues of the oil wells. Yet, the Dubai people are not all convinced and even start the rumour that the emir of Abu Dabi will take over Dubai.

Dubai Agencies and ministries will be more depended on the government for their budgets. So far agencies did not know whether they were going to be limited or not. With limitations also normal life (and shopping) in Dubai would be hit. Speaking of limitations, I was surprised to find that the United Arab Emirates block Flick and YouTube. My personal Oman guide Sangeetha explained it to me as follows: Flickr and Youtube have been blocked, as their content is inconsistent with the religious, cultural, political and moral values of the United Arab Emirates. 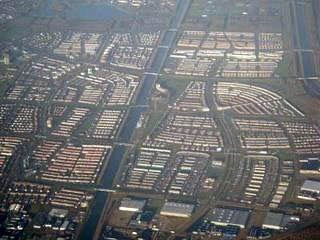 I flew home through Istanbul. Everything went well till Istanbul. There the plane for Amsterdam left more than an hour late and I was in a hurry as a niece of mine was going to be wedded that day in the middle of The Netherlands. With the help of my partner we walked into the municipal hall just before the marriage ceremony of saying yes. All together it was a very long day, before I was really home (see picture taken from the plane).