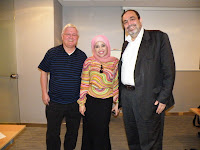 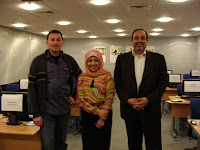 Wednesday was the end of the first national Kuwait eAward competition. The whole process had taken four days, from Sunday till Wednesday. The jurors were tired as well as the moderation team consisting of the Lebanese Gabi Deek, Serbian/Austrian Predrag Micakovic and myself, the Dutchman. Manar Al Hashash was the organiser of the competition and the jury event; she was also part of the moderation team. 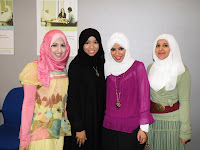 Also the support team was tired, but very happy that things had gone smoothly. They were four IT graduates and very critical. They looked to me like the Girls of Halal, a Dutch TV group, scrutinising the relationships between islam culture and the Dutch with toingue in cheek.

It was an impressive event. Manar had worked on it for three years. In 2005 Manar was part of the World Summit Award competition in Bahrain and is still involved. She has been a presenter of the WSA gala in Tunis and Venice (she has her own TV show in Kuwait). Now after three years of work there, is the first edition of the Kuwait eAward competition, under the patronage of the emir of Kuwait and established within the Kuwait Foundation for the Advancement of Sciences (KFAS).

The event was organised at the venue of Microsoft Innovation Center, close to the KFAS venue and the university grounds. The venue was on the shores of the Gulf. We had four rooms available: two for jury work, complete with fully equipped PCs on wifi. We used the plenary room for jury deliberations; there were many, so we spent a lot of time in there. There was also a small, cosy staff room for the moderation team. All together the venue was suitable. 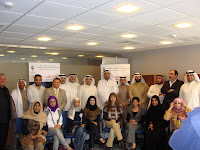 The jury existed of 18 men and women from various walks of life, from university teaching, to a business man and a medical doctor. It took a while to get them talking and debating, but once they started they kept arguing with each other. And the debate sharpened the arguments for ranking the entries. 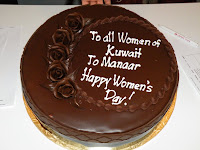 On Tuesday one of the female jury members had taken a cake along, celebrating a lot of items, but most the international day of women. Appointing the winners took two days of intensive debate and exchanging arguments. The first ranked Kuwaiti winners of the categories will be scrutinised again in the international WSA in New Dehli and compete with entries from the other 160 countries

As for the entries submitted I was impressed by the quantity of 195 entries. The number of entries by category differed sharply. eScience and eHealth did not receive many entries. However this is quite common in every national competition as well in the international WSA competition. But I was surprised by the low number of the eCulture category. In most national competitions and the international WSA competition there is never a lack of entries. We debated this issue. I had the impression that the lack of cultural products was partly due to the Islam not allowing human representations in art. We did not find a clear answer to it.

Interesting was also to see that many of the entries had a link to the Iraq-Kuwait war of 1991. This war has made a deep impression on the Kuwaiti. In one day the country was occupied and many cruelties started to happen. From one of the jury members I heard that two brothers in law of him had been imprisoned and tortured. Despite the fact that the war did not last a year, generations will talk about it for years. Looking at The Netherlands and its five year involvement in the Second World War (1940-1945), The Dutch have struggled with the war for years. If literature is something to go by, one can say that every novel up to 1975 had to have a war element in it to be dubbed literature (I exaggerate, of course). But only after 1975 Dutch literature got a wider scope again. And it is only since the nineties that one talks about another scope of the national liberation day.