The Fortune announcement of the American publishing company Hearst launching an eReader, asks for some research. As it was indicated in the Fortune announcement that there would be a wireless device with a large screen with black and white for the time being, speculation was raised that iRex Technologies or Plastic Logic would be potential manufacturers. But from the googling it became clear that Hearst has invested in an hardly visible start-up, also stealth start-up called, named FirstPaper (a symbolic name after the article First Paper by Albert Einstein aboout relativity; it is clear that the FirstPaper wants to change reading). On Google there are references to the company, but presently there is no link to the company itself. 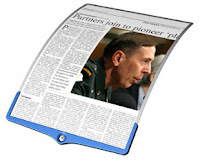 FirstPaper claims to produce a digital paper device, but flexible and with colour. Last year the company showed already a lab demo and said that it would take two years to develop. So now the launch gets closer and so do the speculations. The question is now whether Hearst will launch an eReader in the first place; what size will be the screen (14.1 inch wide?) and will it have colour or start up with black and white. Interesting will also be the price of the device, compared to the Kindle 2.

So Amazon might have Kindle 2, but Hearst will have its own ereader device. Amazon has an extensive portfolio of products for distribution, Hearst has a lot of eBooks and epapers of its own to sell on the ereader. Besides Hearst has an official, who used to be involved with the Sony eBookStore. So Hearst will be able to build its own business model. By having its own ereader and a lot of econtent Hearst will be able to compete with Amazon, which has monopolistic traits. So far publishers had to join Amazon to distribute their eBooks and other econtent. But when the Hearst device is on the market and Hearst has its business policy in place, other publishers might move over to Hearst. At last they will have a choice.